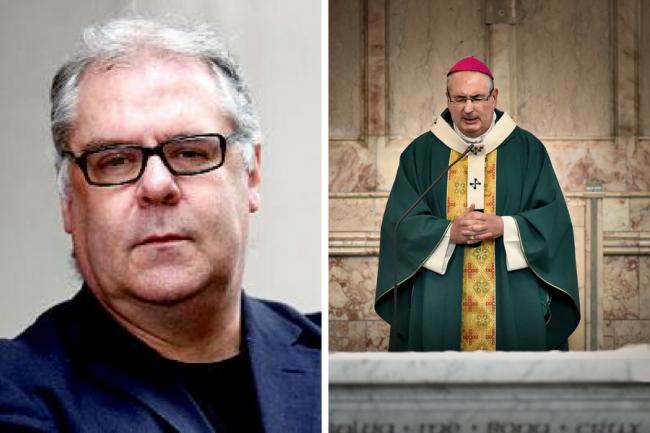 I have been arguing for years that our society is becoming more intolerant, not less and that in rejecting our Christian roots we will end up rejecting our Christian fruits (including tolerance).   I have tried, often without success, to get this message, into the secular media – but occasionally there are shafts of light that break through and wee victories which encourage.  Today is one such day.  The Herald has this brilliant article  by Kevin McKenna, which needs to be widely shared.    When I see McKenna, Archbishop Tartaglia and John Haldane speaking out it encourages me greatly (the irony for me is that this comes at the end of a week  full of battles where the discouragements have come from fellow ‘evangelicals’ and “Reformed’).   I note in passing that they are all Catholics – where are the robust voices in our ‘state church’?  Are they part of what McKenna describes below?

Speaking of state-sponsored religion – I note that our First Minister is going to be the first First Minister to speak at the Glasgow Pride rally today.   Nothing wrong with that – although the genuine question arises in my mind as to whether she would accept an invite to speak to the Free Church Assembly and encourage us by saying that discrimination against Christians because of their views is wrong and that Scotland will welcome especially those refugees who are being persecuted and killed for their faith. Reminded me of these –  Letter from Nicola Sturgeon Calling for a National Day of Prayer   and The April Fool That Wasn’t Funny

Anyway back to the article which is below in full….I love this quote –

One of the big lies that have been allowed to take shape in modern, diverse Scotland where all are apparently welcome is that failure to sign up to the mainstream view of society and what it means to be human is evidence of hate.

And right on cue up pop the Scottish Secularists to prove McKenna’s point.  He is arguing for freedom of religion and freedom to disagree with the State doctrines of morality.  And because he is arguing for such tolerance he is accused of being intolerant –

Anyone who quotes David Robertson and John Haldane is seriously mis-guided.
Kevin McKenna is preaching intolerance.

Apparently quoting myself or John Haldane is to be guilty of intolerance.  We should not tolerate anyone who quotes yours truly or the good professor!  I don’t know which is more alarming – the fact that the writer can write such intolerant and crass comments, or that he apparently is not aware of the self-contradiction in his own statements?!

Kevin McKenna: It is time to stand up to those who wish to criminalise faith

IN many Catholic households in the West of Scotland, Socialism and faith were the twin guarantors of a family’s security at a time when money was unreliable. Each of them nourished the other: your faith was empty and arid if it wasn’t underpinned by a desire to oppose injustice and inequality and your Socialism was a hollow thing without the desire to protect human dignity from the moment of conception until death.

In politics, the Labour Party was our natural home. For the tens of thousands of Catholic men who faced discrimination in the workplace after the war there was no time to weep over this or to protest. Taking to the streets on a Saturday afternoon to march against religious apartheid was a luxury you couldn’t afford when you had children to feed. Yelling slogans and painting banners was no substitute for trying to help oneself.

A powerful Labour Party in government was the quickest route to ending discrimination and the more working class Catholics who accepted this the quicker this might happen.

The Labour movement, though, began to weary of troublesome Catholics active in the trade unions or in its branch constituencies. From the outset there was a barely discernible tension between a body that worshipped at the secular altar of universal justice and members whose primary allegiance was to Rome and a tabernacle of saints you couldn’t see. And when abortion rights became a line in the sand in the modern Labour Party, Catholics who argued that all lives, including those of unborn children, were sacred soon began to feel they were becoming an inconvenience. When some foolish but influential voices in Labour also began to question the continued existence of Catholic schools it became clear that while the party boasted of being a broad church it was having trouble accommodating some of its members who were confessing Christians.

At least, though, you could still have a debate about these things in the old Labour Party. Those who supported a woman’s right to choose to abort her baby might disagree intensely with your pro-life sentiments but they would appreciate the sincerity of your position. In modern Scotland though, which strives to be the world’s most enlightened and inclusive wee country there is a campaign afoot to shut down all debate on those issues which Scotland’s social Sanhedrin considers sacrosanct and beyond dispute.

Thus, if you sincerely believe that a human life in the womb is deserving of as much protection as any other human life you are considered an extremist and obviously (if you are male) a sexist who is guilty of crimes against feminism. If you sincerely believe that the sacrament of marriage is “a covenant by which a man and a woman establish between themselves a partnership of the whole of life and which is ordered by its nature to the good of the spouses and the procreation and education of offspring” then there are people in Scotland who would wish to have you jailed for homophobic hate crime. And if you support the concept of faith schools then you are fuelling sectarianism, despite there never having been a scintilla of evidence to support such a specious claim.

It’s this insidious campaign of intolerance against Christians in Scotland that Archbishop of Glasgow Philip Tartaglia sought to address in a recent essay for the US online publication Crux which is influential in Vatican circles. The archbishop claimed too many Catholics had become “wishy-washy” about their faith. They were being challenged by robust secularism, according to the archbishop, which was hostile to believing “in anything supernatural; in anything they can’t see or touch or experience; or in anything beyond modelling and encouraging decent behaviour”.

I always have a wee chuckle with my atheist chums when they deride the mere concept of spirituality yet have no problems with the cost of an international space programme looking for life beyond the stars. Or when they stress the random nature of creation and everything in it but can’t explain why the seasons fall in the same order year after year (but that’s another debate for another time).

The Reverend David Robertson, former moderator of the Free Church of Scotland and perhaps the most influential Christian thinker in Scotland today, knows what the archbishop is talking about. The Rev Robertson has been the victim of a sustained campaign of abuse for many years now simply for re-emphasising Christian teaching on the sanctity of life and the meaning of marriage. One of the big lies that have been allowed to take shape in modern, diverse Scotland where all are apparently welcome is that failure to sign up to the mainstream view of society and what it means to be human is evidence of hate.

If you are anti-abortion you must hate women; if you are against same-sex marriage then you must be homophobic. It’s a falsehood and a pernicious one at that. Hatred of gay, lesbian and trans-gender people and hate crimes against women are serious and ugly issues. But knowingly to manipulate ignorance around these issues to make false accusations against people whose religion you resent is an equally serious and ugly matter.

John Haldane, Professor of Philosophy at St Andrews University put it far more efficiently. “Catholicism has been weakened by a substitution of belief by social action, with the replacement of rigorous moral thinking by sentimentality”.

The Professor I fear is already slightly behind the times here. Already there have been moves to force Churches by state decree to bow to the new moral totalitarianism. Last week it was revealed that Ben Thomson, who is Chairman of Creative Scotland, has advised the Scottish Government to change the law to force Catholic and Muslim leaders to permit female priests and mullahs. Effectively, this individual, a member of the influential Edinburgh establishment, is seeking to bring about state-sponsored religion. Other groups are trying to persuade the government faith schools are hotbeds of anti-gay propaganda and must be shut. It’s another lie.

Not so very long ago the Catholic Church viewed the Orange Order in Scotland with a degree of fear and suspicion. The two institutions might soon find themselves uniting under one banner. Their common enemy is now an illiberal and feral anti-religious movement which wants to criminalise faith.