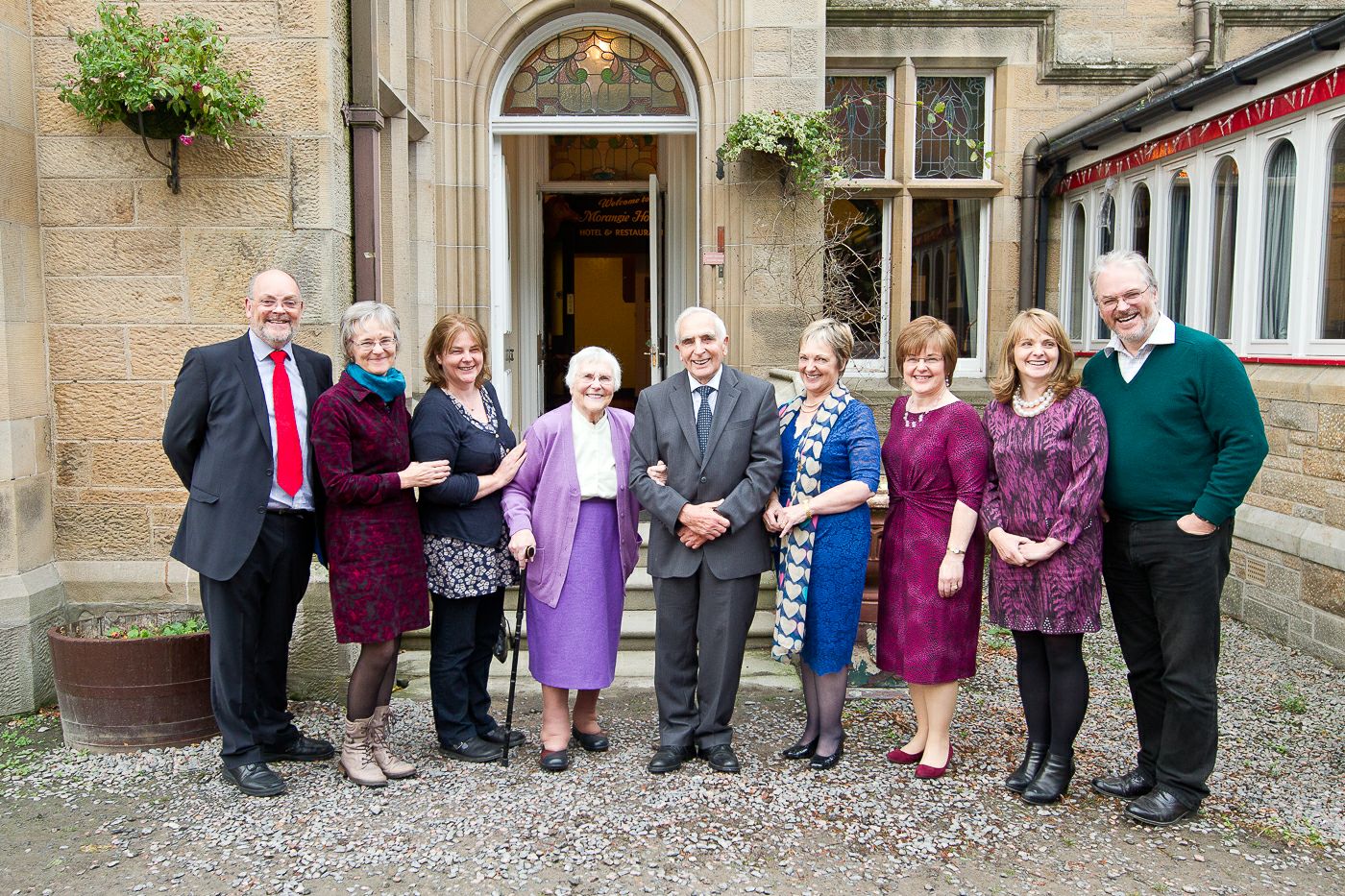 Neil Macarthur was not a friend. I didn’t call him every week, write him letters or have regular phone conversations with him. He was 35 years older than me. But he was a mentor and a profound influence on my life. In the tapestry that the Lord weaves in our lives there are some threads that are major and Neil Macarthur was one of those in mine. I don’t think I would be in the Free Church ministry today if it were not for him – indeed I don’t think I would have had my family without him! I attend his funeral for very personal reasons. I want to pay my respects, honour him and give thanks to God for his life and of course to stand with his family in their (temporary) loss.

He was my teacher –

Mr. Macarthur was one of the key figures in my time at Tain Royal Academy.   I don’t remember much of his teaching – I wasn’t that keen or good at Maths, but I do remember his guidance, advice and character. We used to call him ‘Kojak’ not because of a lack of hair (he had a fine crop) but because to us he was like a detective catching truants. I used to get the bus from Nigg at the same stop as another boy who quite often played truant, and Mr. Macarthur would sometimes meet me going into school and ask me about ‘S’. “Was he on the bus? Did he wait with you?” – I found as many different ways of answering the question without ‘clipeing’ or lying as he did asking it!   In those days we still got ‘the tawse’ and Mr. Macarthur disciplined me a couple of times – both thoroughly deserved. I think he belted me – or at least ordered me to be belted for one incident where we pushed the RE teacher out of the window! (It’s strange but today people shriek in horror at the idea of the belt but all I can say is that I much preferred it to detention – something that Mr. Macarthur worked out very quickly which is why he always gave me detention!).

But what was most impressive about my teacher was his character and compassion. He cared about his pupils, his subject and his work.   In a day when the role of teacher has been so demeaned – he was old-school and made you want to be a teacher. In that sense he was a profound influence on my life.   I, like most of his pupils, and his fellow teachers had great respect for him.   It’s why even to this day I struggle to call him Neil – he was, and always will be ‘Mr. Macarthur’ to me. I can’t help but feel that if pupils had that level of respect for teachers today, and if teachers were as valued as they should be, schools would be a lot better places!

Because his son Archie and I were friends, I would often go to Cromartie Gardens, a plain and simple house across from the school. There I got to see him as a family man – he was not just ‘Mr. Macarthur’ but the dad of my friend.   They say you can tell a lot about a man because of his family – in that sense Kate, Malcolm, Marjory, Archie, Chris, Sally, Sheila say a great deal positive about their dad.   Even as a teenager I watched how he treated his wife (Gena – a lovely lady and a Robertson of course!) and children and it made a profound impression.   Only the members of the family will know most of the good and the bad (only the Lord knows it all); but as an outsider, the Macarthur family were, and are, a joy to know. Their home was and continues to be a place of generous hospitality to young people. It had to be – seven children, twenty-two grandchildren and six great grandchildren! Visiting there today before the funeral it amused me how little it had changed over the past 40 years!   Neil’s armchair still in the same corner.

Scotland’s chattering classes would of course immediately have an image of a Free Church elder from Lewis as austere, grim and repressive. The Guardianistas and Heraldites would love a ‘confirmation bias’ reflective essay on ‘how I escaped my narrow, strict, religious upbringing’. That was not my experience. There was joy and freedom in the Macarthur home. It was a musical household, a place of feasting and hospitality, discussion and argument; simple, profound and real. It was one of those homes that make you glad to have lived in the Scottish Highlands. Of course I know that it was not perfect and of course I know that Neil had his faults – he taught me that himself. The doctrine of ‘total depravity’ was part of his creed. But he was a sinful man saved by grace, and that grace suffused the whole of his life.   I remember when Archie and I went hitchhiking round the Highlands with a guitar and bodrhan (I played the latter as Archie was the musical one!), thinking that we could sing in youth hostels and make a wee bit money. He must have thought we were mad, but he was quite happy to let us go.

As already noted Neil Macarthur did not fit the image of the grim Lewis elder – although he did cause us to have a proper respect (fear?) for him. He was not someone you took lightly. For me I saw a man of strong principle, conviction and faith. So strong that it made him open not closed, generous not mean.   His Christianity was not something that he put on for Church, or held to because of his tradition and culture. For him to live was Christ. I was strongly opposed to Christianity in school and he showed me nothing but kindness. It was the most powerful apologetic.

His home was a school to learn about Christ. I don’t mean that he ‘evangelised’ me, taught me ‘the four laws’ or gave me hell fire and damnation. I mean that it was just clear that Christ was so much the centre of his life. I found it a very attractive and positive thing. I used to argue that all Christians were hypocrites. Mr. MacArthur’s life negated that argument. I didn’t find it surprising that when in his last years he got dementia (what a trial for him and his family) although he forgot many things he never forgot how to pray.  Gena told me that when he prayed it was as though he was in a different world.  Maybe he was?  Or certainly being prepared for one!

I remember being with Archie and the family for a meal and afterwards being told in the living room ‘now, we’ll have the books’. ‘The books’? What was that? It was family worship – we sang a psalm, read the bible and then, both to my embarrassment and awe, everyone kneeled beside their chair and Mr. Macarthur led us in prayer. I’ve never forgotten that. Not least because when he got up from his knees, he sat on his chair in the corner, and pulled up a can of sweetheart stout and had a wee drink! (I should add that this was not a normal practice – it was just a can left over from the peats!).   This was a picture not of drunkenness (I saw that in many homes), nor of a fake pietism and false religiosity (I saw that in others) but of a wholesome and real Christianity.

Another time we were all sitting round the table and Mr. Macarthur turned to the person beside him and said ‘yourself’ before bowing his head. That person did the same thing, until it came all the way round to me – the last man sitting. So that was the first time I had to say grace in public!

When I became a Christian, at the end of my time in school, I usually went to the Church of Scotland in Tain or the United Free Church in Balintore. In those days we mixed very ecumenically and so the denomination was not really that important. The Free Church intrigued me. I knew the caricature and image, but the reality I saw in Neil Macarthur made me more than curious.   The faithfulness to the Bible, the radical politics and social views, the history and I think most of all, the ‘all of life’ aspect, demonstrated to me by the Macarthur family, made me favourably disposed towards the Free Church.

Many a time I had theological arguments with Mr. Macarthur – they were a great way to learn. His graciousness in allowing the arrogant young convert to converse with him as an equal will never be forgotten!   I once recall Prof Donald Macleod, when asked where he got his great theology from, stating that it was the result of discussing with crofters, fishermen and weavers in house meetings in Lewis.   I get that. Sometimes I hear those who consider themselves more ‘sophisticated’ and educated theologically who despise the faith of men like Neil Macarthur and my late father-in-law, Uisdean ‘Red’. They think these men are backward, theologically illiterate, only to be patronized as a quant ‘Brigadoon’ link from the past. Seriously – they could not hold a candle to them theologically.  These men were giants.  I would sooner attend the school of 3 Cromartie Gardens than I would almost any university theological department in the UK today. I would certainly learn more of Christ.

I moved away and although the contact was much less frequent, Mr. Macarthur remained constant. As I became a Free Church minister he rejoiced and encouraged me. We disagreed on some things but we did so as brothers in Christ. Whilst he encouraged me, I’m sure I sometimes frustrated him. I occasionally wondered if he thought I was part of a ‘downgrade’ in the Free Church, but he never went the route of the ‘Continuing’ and I never found him anything other than gracious and encouraging. When I became Moderator I received a lovely message from him in which he expressed the view that though we had not always agreed on everything, he was enormously grateful that I was engaged with and challenging a Scotland, which towards the end of his life, he felt he no longer understood or recognized. From a mature and senior Christian it was a humbling, encouraging and challenging message.

A Sad but Glorious Day

Neil Macarthur was the type of Elder who was the backbone of the Free Church. Not the caricatured legalist but an open, generous, intelligent and principled man.   The church, and Scotland, is a poorer place without him. But he is far richer now, than he ever could have imagined. As a good and faithful servant he has entered into the joy of his Lord. He is now one of those faithful witnesses who has gone on before. Today we remember, honour and give thanks to him. Blessed are the dead who die in the Lord, their deeds follow after them.  It is a sad but glorious day.