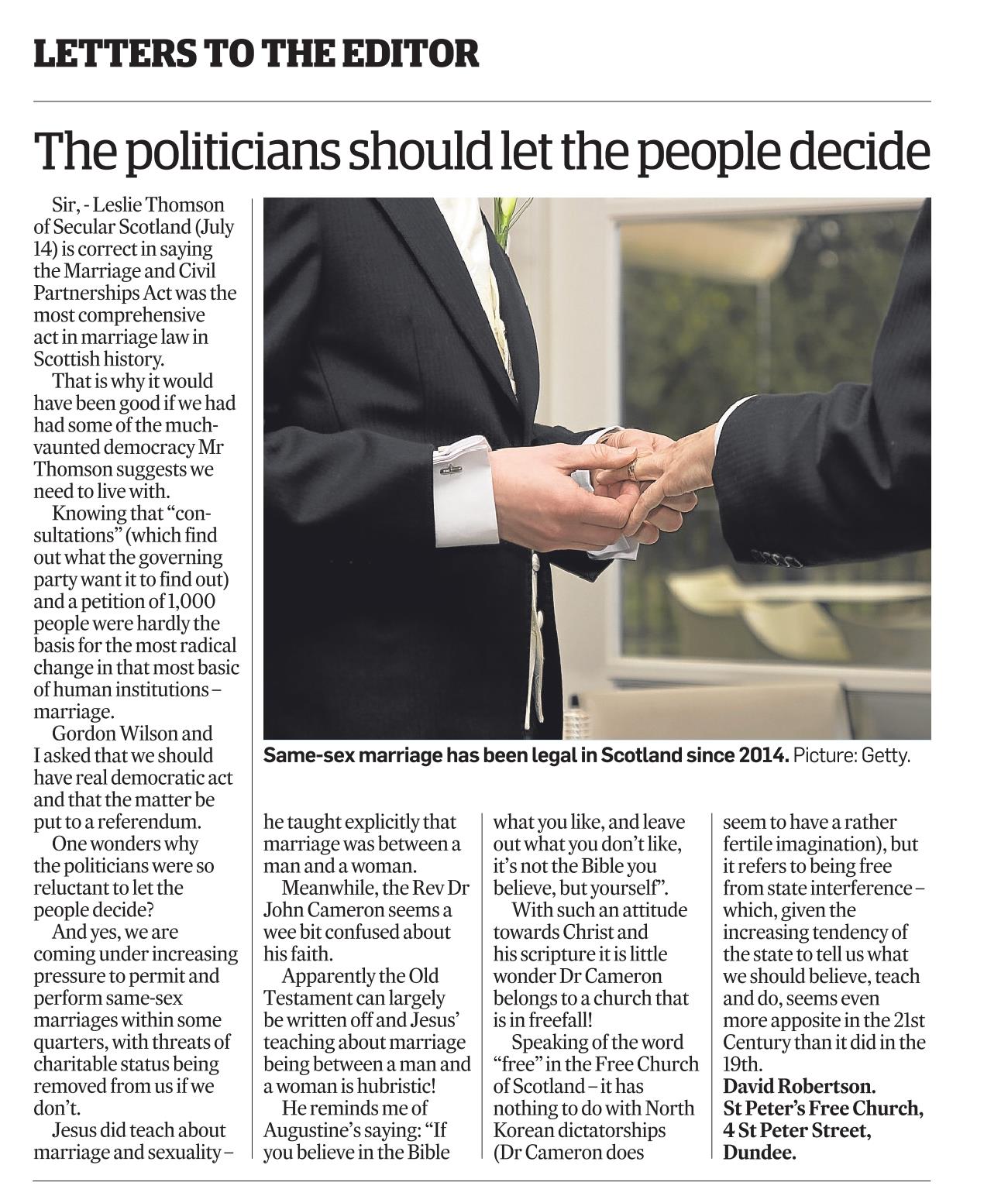 It seems as though whenever the few, brave sane Christians who put their head above the parapet and write into newspapers trying to make a biblical case on issues for the day and defend Christianity are wasting their time.  Often the letters are published, but they are usually followed, if they are any good, within a couple of days  by the mocking letter from the secularists and the superior letter from the establishment liberal ‘Christian” pointing out of course that no-body nowadays really believes such ‘fundamentalist’ nonsense.  If one tries to respond normally the responses are either not published, or side-lined.  In other words it is rare to get a fair shot at overcoming the stacked odds and many of us feel that sometimes in the perception of the general public we are going more harm than good.

I love the Scots word ‘thrawn’ – so I determined that when it comes to this I would not give up.  What I started I would finish and I would continue to challenge until one day it became accepted practice to give biblical Christianity a fair hearing in the secular media.  It hasn’t worked universally but there is hope!  The Dundee Courier – much to its credit – is beginnning to grasp it and I feel that more and more we are getting a fairer hearing. Let me give you this one example.

Last week I had this letter published in the Courier

Does Ruth Davidson Think She Knows Better Than Jesus?

– and it had the usual response from the secularists and the religious liberals.   The Courier published a couple of letters which were quite personal and sneering towards me.  To be honest it was a bit depressing and I wasn’t going to bother replying because it would have more a personal defence than defence of Christ and then I was reminded of two things: “It’s not about you” and “DLTBGYD”.  This latter is my personal code and I don’t share it with anyone (code breakers are welcome!)  but suffice it to say it is partly an exhortation not to give up!  So I wrote back – and as I expected it was not published.  Shrug shoulders and carry on.  Or in my case collapse and end up in hospital for a week! (the two events were not connected).

Whilst in hospital I got a lovely letter from one of the editors thanking me for the letter and saying that they were going to publish it as their headline letter today.  True to their word they have done so.

This is followed on the next page by the following stand out clip – I am delighted.  What was intended as a mocking put down has instead resulted in an opportunity to defend the church, speak up for Christian morality, proclaim the Bible as the Word of God, state the teachings of Christ, expose the forces of Darkness and challenge the perception that normal ‘intelligent’ Christianity is de facto liberal unbelief with a smattering of religious tradition and social liberalism!   A good day.  And kudos to the Courier for allowing my enemies to attack me and allowing me to speak.  It’s what should happen in a free society with a free press and a free church!

PS.  Since this letter was published I have received a number of comments – not all wishing me well!

These are from Secular Scotland:

” I can’t get to the end of reading that. I really don’t want to experience the hatred that man makes me feel.”

“I think the man has mental health problems. If you don’t understand then I have no desire to discuss with you.”

What is fascinating about these – and if they are not hate speech is anything?!  Is that Secular Scotland have not only allowed them to remain but Leslie Thomson who was writing in the Courier, actually joins in…Thats the level at which they operate.  It is from the Pit.