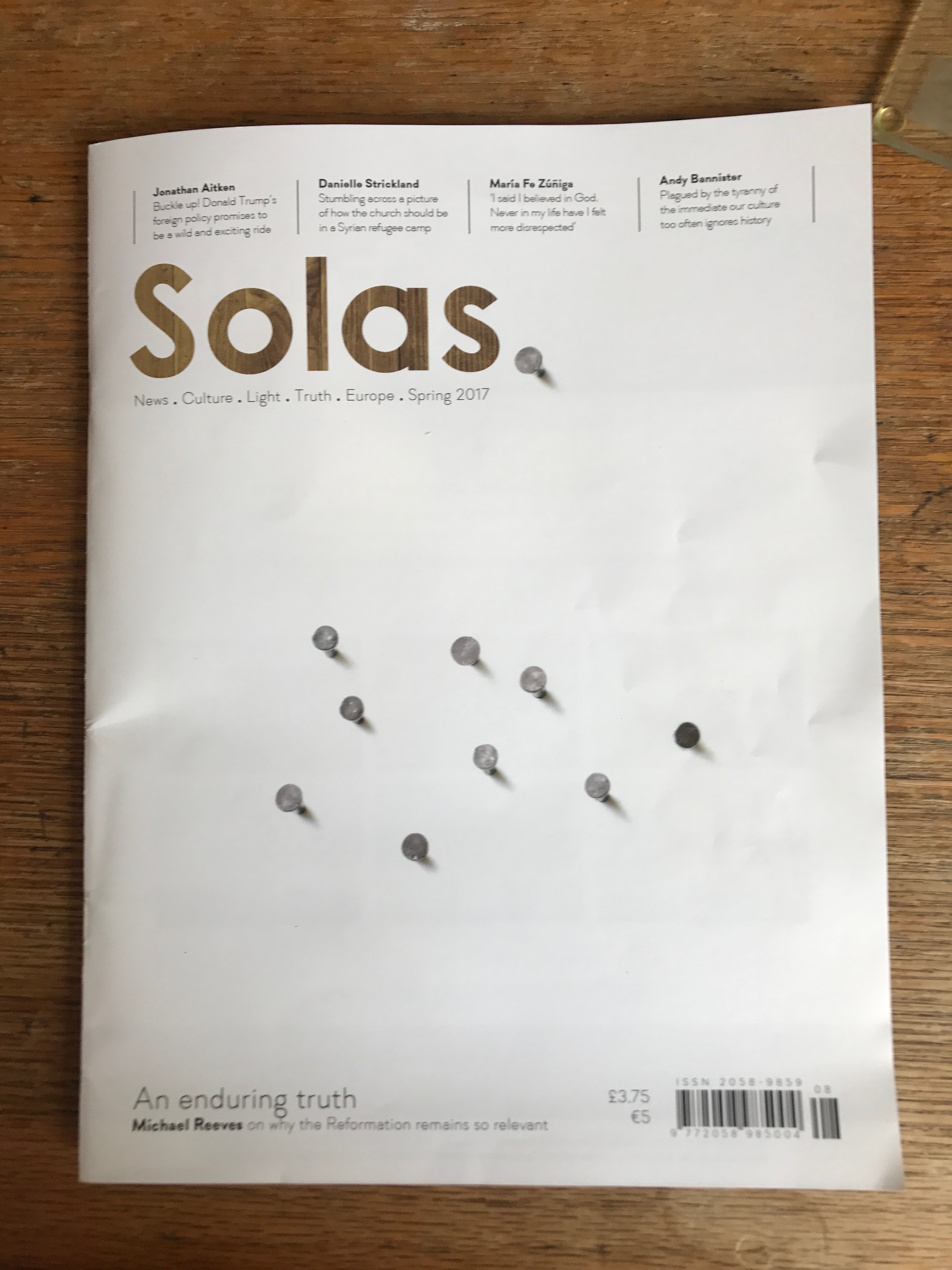 I have just been reading the latest Solas magazine – it is OUTSTANDING!  Every article is a gem.  I’m so proud of what Scott and his team have done…fascinating articles on Malta; Refugee camps; Being the Truth; The Joy of Creation; Respect (this from a wonderful 18 year old Spanish girl); The Speakers Character (from an Italian pastor); Reformation (Mike Reeves in fine form);  Donald Trumps Foreign Policy (Jonathan Aitken); the United Arab Emirates; Scars of the Reformation; The Sellout – a Review; Interview with Jonathan Viera; Mark Hadley on Recognising a Good Review; the Andy Bannister Column.

I would highly recommend you getting a copy – online, digital, from your local Christian bookshop or order here: Here – Solas Magazine

The following is my editorial:

Welcome to the Spring 2017 edition of Solas. Apologies that it is a bit behind schedule but we are trying to keep up with events and make sure that we provide you with the best quality news and views possible. In this era of fake news, the twitterisation of politics and the cheapening commercialization and shallowness of the arts, I am more convinced than ever that a good quality Christian magazine which looks at world issues and cultural events is essential. You will probably not agree with everything in this month’s edition but if you did that might be a sign that we were not doing our job! One thing I hope is that you will find it varied, interesting, stimulating and challenging.

I was recently visiting the home of a senior Scottish politician, Gordon Wilson, who also happens to be one of the Solas founders. Gordon incidentally is seriously ill and he and his family would value your prayers. During the course of the conversation he remarked how increasingly irrational and insane the world seems to be. Perhaps the world was always like this, but it’s just that we are seeing it more! Whatever the case there is no doubt that in the Western world there is a deepening sense of crisis and unreality. A generation that has been told there is no such thing as absolute truth is now being confronted with the consequences of that insane philosophy and is now moaning about being post-truth. It is no surprise that people struggle to recognize the difference between real news and fake news. It seems as though there are far too many who are willing to ascribe the term fake news simply to news that they don’t like, or that contradicts their political opinions or worldviews.

For April Fools day I wrote a spoof letter to myself from the Scottish First Minister, Nicola Sturgeon (you can read it at www.theweeflea.com) asking me to lead a day of national prayer in Scotland. Those who know the extent of secularization in Scotland will realize how unlikely that was – but the amazing thing was how many people believed it – including some militant secularists who were furious and some Christians who were delighted at this apparent about face! I guess in this age of post-truth, alternative facts where a reality TV star is leader of the Free world, an Islington Marxist is leader of the Labour party and an Italian comedian could become leader of Italy, its getting harder to distinguish fact from fiction! April fools are going to be harder to do!

This has devastating consequences in all areas of society. The retreat from rationality into emotive self-absorbed feeling as the judge of all facts is deeply worrying. For the first time in my life I have come across relatively intelligent people who are arguing for a flat earth! This week I had an academic who I admire seriously stating that he wonders whether the attack on the Houses of Parliament on Westminster bridge, which killed five people, was instigated by the British secret service in order to divert attention from a vote in the Scottish parliament on another referendum! Another Christian politician I respect was seriously suggesting on Twitter that a twitter account from a Nationalist supporter, who compared a BBC reporter to a guard at Auschwitz, was possibly a plant from the secret service! In a post truth, fake news world, paranoia and conspiracy theories flourish!

Which is why we need a return to rational thinking….our minds need to be renewed. We need a rational coherent biblical worldview. And we need to have trustworthy and thoughtful analysis. I’m not saying that Christians are the only people who can provide that, but I can say that the Christian worldview provides the best context for such truth. You need the truth for the truth!

On the day in which I write this we have just had the mercurial President Trump reverse policy and order a missile attack on Syria, and we have had a terrorist attack killing people in the centre of Stockholm. I find it fascinating that Jonathan Aitken in his analysis of Trump’s foreign policy predicts that Trump will not be soft on Russia!

It is this kind of analysis and thinking which Solas tries to provide. Please do encourage people to subscribe and support the magazine….we cannot do it without your help!

Yours in Christ David

Here are some further images of the magazine –