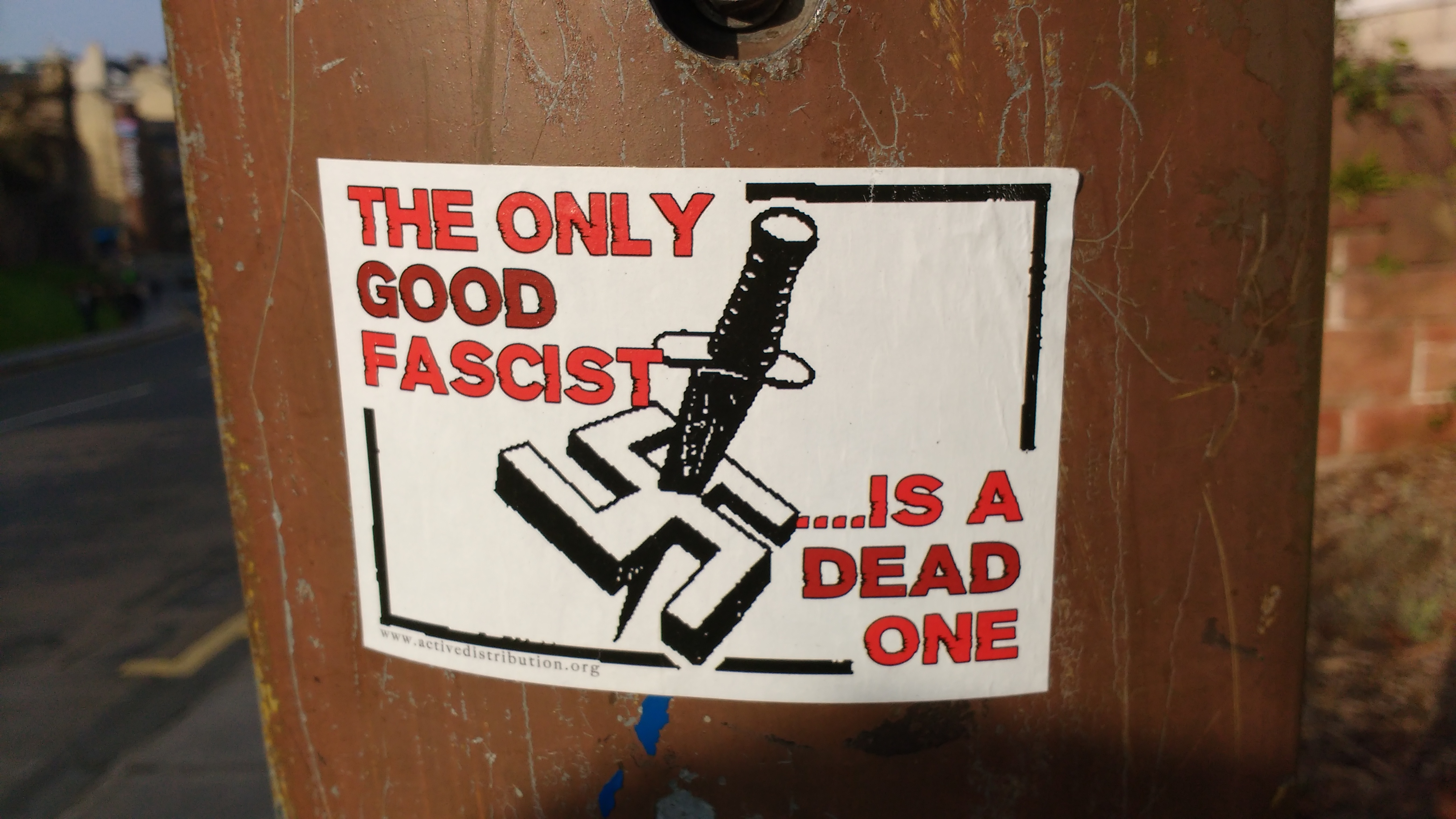 There is an awful lot of hate around.  Even though who talk about ‘hope not hate’ spend a lot of time stirring up hate against particular groups.   The truth is that hatred of ‘the other’ seems to be endemic in human nature.  To experience hatred and dislike because of personal characteristics and faults is one thing, but to be hated because of the group you belong to is another degree of horrible.   To be hated because of your race, gender, skin colour, class or sexuality is just simply wrong.   The trouble is that once group think takes hold, then those that don’t join in become a group to be hated – even in the name of love.

There are legitimate concerns that people have about immigration, but when such concerns become hatred of a particular people or group, it is always evil.  I voted for Brexit because I believe that a country should be governed by its democratically elected leaders and not by a corp

orate unaccountable supranational body.  However I find myself disgusted by some of the people who voted the same as I did, because they don’t like foreigners. To be fair my experience (and the vast majority of the research) suggests that this was not the primary motivating factor of those who voted for Brexit – but the fact remains that there are still a significant number of people for whom this was a  real motivation.   The ‘other’ are Europeans.  They are the ones who are taking our jobs, filling our schools and corrupting our values.

But for a different group the ‘other’ are the English. One of the biggest objections I had to my latest posts was the use of this photo showing a house in Scotlan

d dubbed with anti-English slogans.  Its out of date they said.  Our side wouldn’t do this.  But my postbag testifies otherwise.  The constant use of anti-English language and the setting up of a contrast between the ‘We Love EU’ and ‘Hard Right Tory Brexit’ is easily feeds into a narrative which encourages hatred of England and the English.  They are the ones who are leading us down the road to fascism and taking us away from the progressive paradise that is the EU.  Again to be fair the majority of Scottish Nationalists are not like that.

Speaking of fascism – the demeaning of language into meaninglessness continues with the misappropriation of the term Fascist, which now means ‘anyone I disagree with and don’t like’.  People don’t know what fascism is and yet it is constantly used, even by journalists, politicians and church leaders, who should know better.  As usual Brendan O’Neill puts it far better than I can.

“The word is now used with an ahistoricism and thoughtlessness that are genuinely alarming. And among the upper echelons of society, not merely by scruffy protesters or online blowhards. The Archbishop of Canterbury says Trump is part of the ‘fascist tradition’. Prince Charles has warned darkly of a return of the atmosphere of the 1930s, and we all know what that means. ‘Yes, Donald Trump is a fascist’, says New Republic, a magazine that once considered itself a voice of reason among the paranoid style of American political life. But everyone’s paranoid now. Everyone now sees fascists.”

My concern is not so much with fascism but with the dumbing down of our society, including our media and political discourse and what that leads to.  Its not just Donald Trump who tweets nonsense.  I ‘follow’ a number of politicians and sometimes I wonder how any of them have time to do any work for their constituents at all – they are so concerned about tweeting the latest news on Trump or posts on why the EU is paradise, their leader is great, and everything else is bad or ‘fake news’.  This dumbed down discourse can be seen in most of the negative reaction I received to my recent posts. Apart from a few on the Unionist side who asked about why I supported Independence and legitimately asked for more evidence and reasons (sorry that I don’t have the time or inclination just now to spend even more time writing about this subject), all the negative reaction was from people who objected to my articles.  But NOT ONE offered any reasoned refutation, or indeed any refutation at all.  It wasn’t so much the abuse that got me, it was those who didn’t abuse but just accused. “Reads like a Daily Express editorial”, ‘You sound like a Tory”, “Its all opinion and prejudice”.  There was no constructive engagement.  For these people I may as well have used 140 characters for some glib emotive soundbite, rather than write over 10,000 words!

Dumbing down then enables people to become deluded by the delusions.  It really is quite extraordinary that in an age of cynicism and unbelief there are so many political fantasies that people actually believe in. ‘We will make America great again”, “Brexit will mean a return of great British greatness”, “Once we get out of the UK and into the EU we will live in perfect peace and harmony”.    To paraphrase GK Chesterton, when we cease to believe in political ideologies, its not that we believe in nothing, it is that we will believe anything!

And after the dream/delusion comes the waking up to reality.  When it dawns that our nirvana is not going to happen instead of admitting we were wrong, we have so much invested that we have to find someone to blame when it doesn’t.   And so the demonisation of the other begins.  People who are either too lazy, too unthinking, or too self-obsessed with their own delusions, can’t stand being challenged and so they hate. Even if, in their own eyes, they are on the side of reason and love they will emote and hate.  In fact its worse than that – its BECAUSE they are on the side of love that they feel they have the right to hate.   And in the age of the internet and social media, they find it much easier to do this online, than spray painting their neighbours house.

This demonisation has frightening consequences. Someone from Edinburgh sent me this photo of a poster in Edinburgh he passed the day after he read my article. One of the most disturbing series o

f messages I got was from someone who said they were a history teacher and described the UK government as a fascist government. Now imagine you are a child who hears that, and hears about the evil of fascism, and then reads a poster like this. It’s beyond irony that those who want to use hate speech legislation to suppress all views except their own, are so often full of hate.

To be honest I took a long time and was quite reluctant to write the original posts about why I opposed a Yes vote in a 2nd Indy ref.  I could have been persuaded to come back to the Yes camp, but the lack of intelligent response, the unthinking abuse and the many stories I heard from people who had suffered the same thing has confirmed my view, not only that I would vote No, but that the referendum itself would be a disaster for Scotland. It would be bitter and divisive – even more so than the first one.

Where is the Hope in all of this?   I don’t see it in politics.  And I don’t see it in groups like ‘Hope not Hate’, because they too demonise the other, in order to justify themselves.  It seems as though we are in an endless cycle of blame, guilt and hatred.   But there is a solution.  There is somewhere where ‘the dividing walls of partition’ are broken down, where people really do become one and where love, harmony, unity and diversity predominate.  I am of course talking about the church of Jesus Christ.   I’m not so much talking about the institutions, or political organisations or social clubs that masquerade as churches – I’m talking about the church where the Word is proclaimed and lived, the Gospel believed and where Christ is central.  There everyone is welcome.  The photo below is of the wedding of a Malaysian couple who are part of St Petes.   We had a great celebration last Saturday, people of different ages, cultures and backgrounds worshipping and celebrating together.  They are part of a community that welcomes people from all different back

ground and points of view.  Here we have people from many different nationalists, here we have pro and anti-Brexit, pro and anti Scottish Indy…..and here is a shocker – this is a that welcomes Fascists, Communists, Trump supporters, Nationalists, Socialists and even Tories!  We welcome all, because we want to proclaim Christ to all. Christ does not accept any of us ‘as we are’.  He accepts us in order to change us.  That is our great hope – that we might be changed.

Its not an ideology that brings love and unity – its Christ.  If you want Love not Hate, then you need to know the One who is Love.