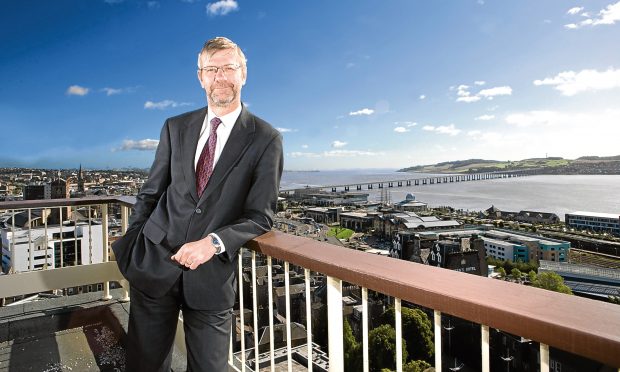 The following letter appeared as the lead letter in todays Courier under this headline – “Scotland’s Poor Must not be Left Behind”. It was in response to this article about Sir Pete Downes earlier – Principal warns of Brexit Brain Drain and also This

Sir, – I have great sympathy with Professor Sir Pete Downes, principal of Dundee University, in his concerns about the impact of Brexit and I share his desire to see many foreign nationals at both Dundee and Abertay Universities.

They enrich our city and my church, for one, would be poorer without them.

However, I think he is unwise to allow his political prejudices about the EU to influence his doom-and-gloom prognosis for the university.

I realise Dundee University receives a great deal of finance from the EU but the possibility of this being removed should not cause panic.

Sir Pete campaigned against Brexit. He should not be continuing that campaign but seeking to get the best deal possible for the university.

As someone who is involved with inter-national students I want to say foreigners are even more welcome in Dundee. We need them.

It’s good that Dundee University has 1,000 students from other EU countries and I agree we should campaign to see as many as possible continue to come.

However, universities need to remember they are not just corporate companies selling educational products.

I wish that there would be as much concern and passion to see 1,000 students from Scotland’s housing schemes and from the poorer countries of the world.

This whole episode illustrates some of the main issues with the EU.  Sir Peter is a strong supporter of the EU because his university gets a great deal of funding from the EU.  The EU is great at funding media, political, arts and educational establishments.  There is of course a quid pro quo – it is precisely these who were full on in their support of the EU. There were some Universities who even told their students how to vote.

Some may say, well that’s the real world and who can blame them?  They are after all just defending their corner.  I think there are several things wrong.  Firstly they portray their defence of the EU as being altruistic and all about the good of humanity – not just defending their share of the pot.  I’m sure there are good motives in there as well but lets not pretend that this is just about internationalism and goodwill for the whole of humanity!

But you might say – isn’t it great that the EU pays so much for British Universities?  No.  Its not.  Because it’s not the EU that pays – its us.  The British taxpayer.  Imagine I took £10 from you and then gave you £5 back.  Would you expect me to be grateful to you?  To be beholden to you and fearful of not having your patronage?   It is like that with the EU.  The trouble is that those in power, the elites in this country, are those who primarily benefit from the EU spending our money in this way.   But all of us pay for it.

I don’t think the EU should be handing out largesse, which we pay for.  It would be much better if the Scottish government raised and spent our taxes on Scottish education and universities.  Then at least we the electorate could have some say.   Do we want our Universities to be run as corporate entities, reliant on EU grants and wealthy benefactors?   Do we think that the Principal of Dundee University should be paid £100,000 plus more (with a salary of £260,000) than the Prime Minister of the UK (£150,000) or the First Minister of Scotland (£149,000)?  Does it really take more to run a University than a country?

And there is another elephant in the room that is never mentioned.  EU students are paid for by Scottish taxpayers.  They don’t pay fees (although English and Irish ones do!).  We pay them.  If this stopped we would save £93 million and raise up to £120 million from fees. See this article in the Courier   The fact is that £27 million of public money is spent on free tuition every year to an increasing number of EU students. In the past nine years the number has grown from 6,738 to 13,312 in 9 years. Meanwhile Universities have strict caps on the number of Scottish students they can accept.   The promise to continue to fund EU students at Scottish Universities may be a worthy one, and certainly got a large round of applause at the SNP conference.  I wonder however how many of those applauding realised that this largesse and virtue signalling comes at a cost – a cost which will largely be felt by poorer Scottish students and those of us faced with a declining education system.

I don’t think this is what education should be for.  It should not be a political football.  It should not be about the political elites taking tax payers money and using it just to fund their own ideologies.  Education should be for all.   If the Scottish government really wants us to be internationalist then can we look much more at developing our Universities as centres of excellence which cater for the poor from Niddrie (Edinburgh), Castlemilk (Glasgow), Charleston (Dundee) and the Ferry (Inverness) as well as those from Aleppo, Nairobi, Kuala Lumpur and other non-European as well as European countries.  Whilst I accept that educational establishments have to be run in a business like manner, I don’t accept that they should be primarily businesses who are selling education.   Maybe I’m too much of an idealist in thinking that education should be for educations sake.  But I would rather be that kind of idealist than defending a privileged system which takes from the poor in order to educate the rich.

Lets have more international students – not less.  But let them be from all over the world and please lets not fund EU students at the expense of the poor in Scotland.