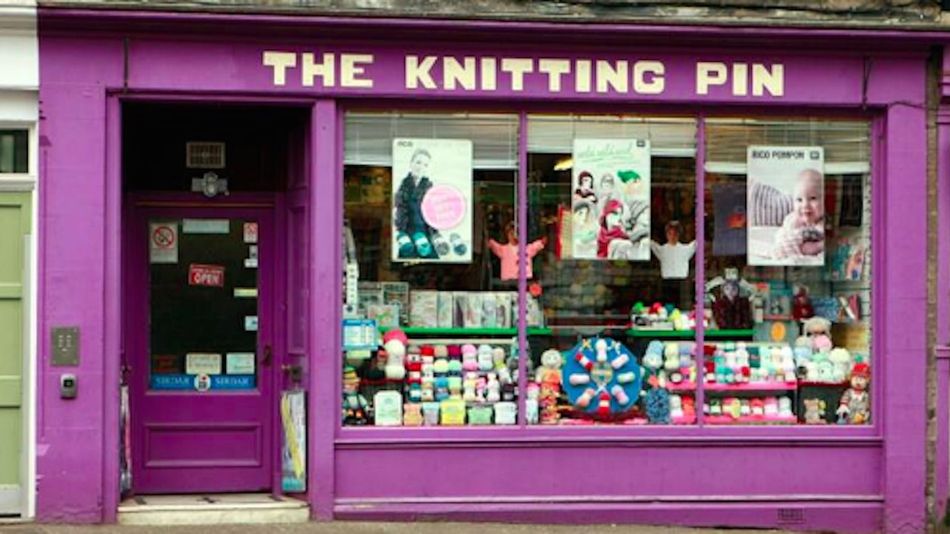 So here we are in Australia, sitting at our log fire (it is winter and it does get cold!), musing on the news that there are Alps in Australia and that 70cm of snow have just fallen on them, when our daughter reads the following story:

I laughed out loud.  A woman sentenced to knit several items for charity as a punishment for a road rage incident?  That had to have been some wacky judge in the US!  But no, it was Dundee – Sheriff Rafferty told the defendant:

“You went in the same direction as your victim, at the very least, and then went to her car door and assaulted her. You will bring to court several items that you have knitted that you are prepared to donate to a charity shop. It will not be a meagre amount. You have committed a serious offense.”

And then we looked at the photo of the knitting shop she was heading to….it is the one just down the road from the manse, the one that Annabel uses.  It is a lovely old style shop where the woman who runs it can tell you everything about wool and knitting needles.   The kind of shop that you go into for a wee chat and a blether (if you are interested in knitting!).

The whole story made me smile…and made me long to be home in Dundee.  We have a knit and natter group in St Peters and it serves a really useful purpose – providing fellowship whilst doing something useful.  But the whole story raises lots of questions.

Is there a theology of knitting?  After all doesn’t Psalm 139 tell us that the Lord ‘knits us together’ in our mothers womb?  Knitting is creative and in that sense of course it is possible to knit for the glory of God.

Is knitting a punishment?   After all the sheriff said that she had committed a ‘serious offence’ and could have been sent to jail.  So is knitting worse than jail?!  Actually I think the sheriff showed a degree of initiative, compassion and justice.  The woman did not have a criminal record, this was her first offence so sending her to jail would have been pointless.  Getting her to do something good for the community makes a whole lot of sense to me.

Is knitting therapeutic?   Coming to Australia has been great to see our new granddaughter and to help support her parents.  Perhaps the best thing Annabel has done is teach Becky to knit….its therapeutic, practical and fulfilling.   What’s not to like?!  And it is calming…after all who ever heard of knit rage?  Although having said that, I have no intention of coming between the knit and natter group and their needles!  And some airlines won’t allow knitting needles on their planes, just in case knitting terrorists are on board!

Here is where knitting leads….the hat that Annabel made for Isla….

Not so happy with the hat maker…!

Blessed are the knitters….

“I’d like to teach the world to knit, in perfect harmony… ”