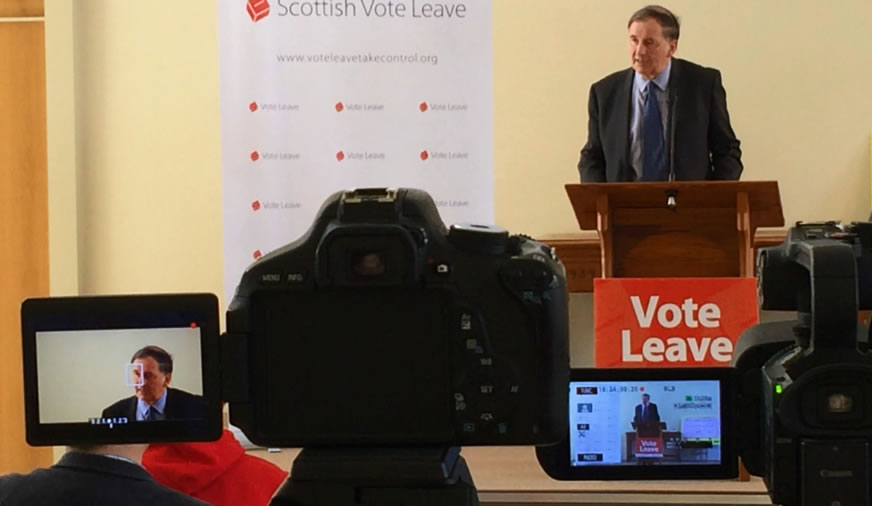 Let me begin this speech by stating that I am here in a personal capacity – not as moderator of the Free Church, which does not take a political stance, or director of Solas, or as a Dundee supporter, or a member of Dundee Chess club. I speak in a personal capacity. I am an SNP supporter and I cannot be described in any way as a little Englander or some kind of right wing Tory pining for the British Empire. I am a pro-European who is opposed to the European Union.

I have seen SNP policy change on the EU from being for leaving, to now seeing any desire to leave as almost some kind of apostasy. It is striking that, in the new atmosphere, no SNP MSP feels free to speak out for leaving the EU. I find it difficult to believe that every single one of the 63 SNP MSPs and 54 MPs is pro-EU.  If so, we really have entered the realm of the Stepford politician! Such groupthink on such a complex issue is, to say the least, disturbing.

I am conscious that many MSPs are genuinely pro Remain and I respect them and their views. However, between 30-40% of SNP supporters are for Leave and I want to speak on their behalf and urge the party to either change its policy or, at least, give a voice to those of us who support the idea of Scotland leaving both the UK and the EU. These are my reasons:

“Every pro-EU argument boils down to ‘you can’t trust the plebs’.”

For all these reasons and more we are opposed to the UK remaining in the EU and we believe that the SNP, for the sake of short term political gain, have been hoodwinked into accepting a policy that is regressive and ultimately harmful to the people of Scotland. Democracy, accountability, economic justice and independence are the reasons why we would urge all SNP to vote leave.

Footnote: We note with interest that the ubiquitous unnamed SNP spokesperson has declared: “This organisation is not a registered campaigner in the EU referendum, has nothing to do with the SNP and its main spokesperson is not even a party member.”   This is wrong in almost every respect.

Firstly we are part of the Scottish Vote Leave campaign. Secondly, we have everything to do with the SNP – we represent the group of at least one third of members and supporters who intend to vote leave. The party machine, and those dependent on them, might like to ignore these supporters but that is hardly the actions of a party interested in democratic debate to do so.   I am not the main spokesperson but just simply one voice amongst many – most of whom are SNP members. It is disappointing that the SNP leadership rather than engage in the debate chose to denigrate and seek to sideline those of us who are their supporters but don’t agree with this very divisive policy.

If the SNP leadership are so sure that this is the right option to take for Scotland, then instead of engaging in sound bite sloganeering and seeking to silence any opposition, why don’t they agree to a proper democratic debate? If Nicola Sturgeon and any of the current leadership are prepared to have a public debate with those of us who support Scottish independence from both the UK and the EU, then we would be more than happy to oblige. If you will forgive a minister giving one biblical reference – such a debate might be David vs. Goliath – but then we all know how that one turned out! The challenge is issued. Is the leadership willing to debate or do they prefer to enforce their policy in other ways?   Do they have enough faith in their own policy or are they feart that the gaping holes in its logic will become obvious? Is the SNP prepared to engage in democratic debate, as is the Scottish tradition of radical politics, or will they follow the EU system, the persuasion of propaganda rather than that of democracy?

David Robertson…free thinking individual citizen who actually believes in democracy!
My other blogs on the EU:

The EU Referendum – Part 2 – ‘Rushed, ill Thought Out and Extreme’

I also add the following sent to me by someone who made some very good points!

This referendum has the wrong question. It relates to the EU as it exists now. But following the Treaty of Lisbon  the EU aspires to be a Federal State of Europe with its own armed forces and with its own foreign policy  which member states will be required to follow.

Secondly, it is open for the SNP to advance a case for remaining in Europe
with full membership. But can it do so when Scotland’s input is limited to 6
members of the Euro parliament (out of 750), has no ministerial or heads of
government representation on European Councils and no membership of the
Commission.

That’s why I find both British questions unpalatable. In this banal
referendum, Scotland is irrelevant. One would think that might make the SNP
start an exercise in strategic thinking instead of siding automatically with
establishment political elites.

I  don’t understand where the SNP is coming from or where it wants to go, save with the British flow. I suspect it doesn’t know either.

This was covered in the Dundee Courier –