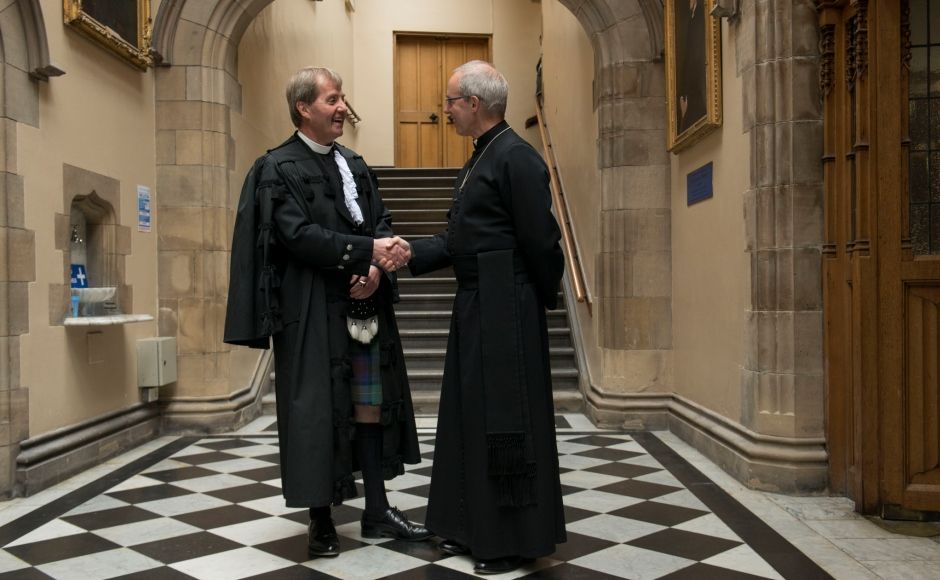 The Church of Scotland wanted to move on from dissing the Bible and rejecting its teaching about marriage to some things more important.  This week we have been finding out what these things are.

Smacking – The General Assembly voted to ban corporal punishment at home. Of course they can’t, but they want to ask the government to do so. The Kirk agreed by 275 to 259 that any corporal punishment of children must be recognized as a violent act and that violence is damaging to mental and physical health.   In asking the government to criminalise smacking Rev Sally Foster-Fulton stated “We now add the Church’s voice to many other organisations to call upon the Scottish Government to remove the defence of justifiable assault, granting children the same rights that every adult enjoys in this area.”. There were several good points made in the debate – not least from Rev Hilda C Smith, from Lochgilphead, presbytery of Argyll, said the majority of the Kirk’s proposals could end up with “parents standing in the dock accused of assault” and an “at risk register with children on it”.  The fact that the Kirk has voted for a policy, which would see many of its own members in court or jail, is absurd.   The Kirk could not see the inconsistency in stating that the child should enjoy the same rights as the adult – which means that either adults will now be allowed to send other adults up to their room, or compel them to eat their greens, or refuse to give them money, or that adults will no longer be allowed to do this to children.

However there was something more chilling that this. “Yet the state generally accepts parents have a right and responsibility to bring up children within their own, inherited value system, provided those values do not offend the norms of the wider community. “ Note that last line. The Church of Scotland is asking the State to determine the values of Christians. Extraordinary. And really dumb.

Europe – Whilst the Kirk has an ‘open’ policy regarding the bible, same sex marriage and many other biblical doctrines, they are very clear about the EU, about which the Bible says nothing.   The Assembly voted ‘unanimously’ (majority by stamping of feet) to encourage people to vote to stay in. Rev Karen Fenwick made the simple but effective point:

“We are not a political party or a trade union. I think the Scottish public are quite capable of knowing we support the EU without us telling them what to do.”

But apparently the Assembly does not agree.

Under the terms of the agreement, both denominations would welcome one another’s members into congregations and ordained ministers would be allowed to exercise ministry within the existing discipline of each church, though only within England and continental Europe. Again this surprised me because it is something that we already have – throughout the world. For example when we wanted a new minister for our church plant in St Andrews we had no problem in asking an Anglican curate to come and lead the congregation. It’s also good to know that the Church of Scotland and Church of England both have church discipline. One wonders what the C of E will make of the C of S deciding that its own ministers can live and teach contrary to its doctrine.

It strikes me that we are dealing here with two very different cultures. The more formal bureaucratic institutional churches love this sort of stuff. It is the basis of this kind of formal ecumenism.   Biblical churches will of course make formal arrangements for working together, but our real unity is in Christ, in the Spirit and according to his word.  Today at the Free Church Assembly we had a lovely visit from two brothers from the Presbyterian Church of East Africa. They had been at the C of S assembly and clearly felt greatly distressed at what was happening.   They immediately felt at home with us. Just to think – the C of S have abandoned fellowship with a sister Presbyterian church of some 4 million people, to have a formal concord with a very mixed Anglican church with less than one million people.

Fracking and Fossils – Another key issue for the Kirk is disinvesting in companies whose major business depends on fossil fuels. This might make it awkward for the Scottish government and for many C of S members – given that so much of the Scottish economy is based on oil. One interesting comment was from Sally Foster-Fulton saying the C of S should do this because “We have moral leverage”.   With who? On what basis?

Feedback – Its always (usually) good to get feedback – and one C of S minister clearly upset at my earlier post about the Assembly A Rubicon has been Crossed – The Church of Scotland Assembly Decision on Saturday sent me the following to post in public so I am happy to do so here:

I invite you to come down off your high horse and leave the judging to God. Pray that God will have mercy on us all and that, by his grace, we shall be strengthened to live faithfully, without fear or favour, whichever church we are in.

Only yesterday Scott McKenna, the very man you continue to vilify, spoke about you with warm appreciation, in recognition of your resistance to the influence of secularism in Scottish education which he shares.

I appeal to you to stop picking fights and start building bridges. Our God is big enough to police his own boundaries. He has called us to put our energies into proclaiming the Gospel, making disciples and baptising believers.

Since Rory wrote this to be posted in public I thought it only fair that I put my reply here as well. It’s always good to dialogue!

I don’t have a high horse (and if you are going to sign a letter ‘respectfully’ can I respectfully suggest that its probably best not to begin with such a disrespectful remark?), and I am very happy to leave the judging to God. But as always with people who make this kind of claim can I just ‘respectfully’ point out that it is self-contradictory to make a judgement whilst posting about not making judgements.   It is of course part of the duty of the Christian pastor to disciple and warn the people and protect them from the teachings of false shepherds. I am sure you will agree with that. As I agree with you that by Gods grace we should be strengthened to live faithfully, without fear or favour, whichever church we are in.   We need to make sure that does happen and that we stand up for the word of God against all the false teaching that comes into the church.

Speaking of false teaching, thanks for your remarks about Scott McKenna. You seem to be confusing being against false teaching with vilifying.   Perhaps this is the problem that the C of S is having nowadays with its theology?  Just because you disagree with someone’s theology and teaching does not mean you personally dislike or vilify them.   In fact one of the reasons I debated with Scott was because I met with him and liked him. I felt so sad that someone so pleasant could be teaching theology so horrific.   It was sad that the debate was taken over by the C of S establishment who prevented what could have been a profitable on-going dialogue.   Do you agree with Scott’s view that saying Jesus died for our sins is horrific theology?

I don’t pick fights. I hate fights. But I love truth, Jesus and his church more.   I will challenge those in any church I love, who are destroying that church by their heresies.   I love building bridges. But where do you want me to build them? You want to build bridges with false teachers? You want me to invite the wolves into the flock? What kind of under-shepherd would I be if I did that?

It’s a very strange theology, a form of pietistic Calvinism, which says God is big enough to do it himself. He doesn’t need you to convert the unbelievers, or feed the poor. That wasn’t what you were saying? But that is as logical as saying that God is big enough to police his own boundaries.   He has given us a church with elders and pastors who are asked to police the boundaries.

Yes he has called us to put our energies into proclaiming the Gospel, making disciples and baptising believers. That is why we must speak out against false teaching, practice biblical church discipline and ensure that the church remains the pillar and ground of the truth, not the disseminator of poisonous falsehood.

Thanks again for having the courage to put your remarks in public (most people just complain behind my back).

Yours in Christ
David