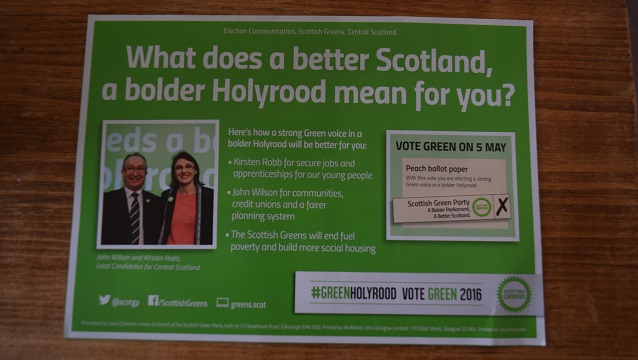 Christians should not vote for the ‘regressive’ Scottish Green Party unless they amend their controversial proposals to legalise abortion on demand in Scotland, the Moderator of the General Assembly of the Free Church of Scotland has said.

Earlier this week the Greens launched their manifesto for the Holyrood election, which stated that they “will push for abortion to be removed from the criminal justice system”.

But in a stark rebuke, Rev David Robertson said it demonstrated that the Greens “cared more about plants than people” adding

“I do not see how any Christian can in good conscience vote for a party which is insisting on such extremist anti-human life measures”.

According to the last census, 54 per cent of the population of Scotland stated their religion as Christian.

The Moderator said: “Sadly it seems as though the Greens are more concerned about plants than they are about people.

“Whilst there are individual Green policies than many of us would agree with, I do not see how any Christian can in good conscience vote for a party which is insisting on such extremist anti-human life measures.”

“I call upon all those who profess the name of Christ to remember his words ‘whatever you do for the least of these, you do for me’.

“If the Greens insist on the absolutist right to kill the child in the womb then we cannot vote for them.

“We call upon them to change their policy and allow their MSPs freedom of conscience on this most important moral issue.”

Rev David Robertson continued: “When we suggested that there were those who would seek to change Scotland’s abortion law to make abortion even easier, we were ridiculed and told that there were no such plans. Now we find that our fears were justified.

“In a break with the practice that abortion is a matter of individual conscience, the Greens have now decided that all their MSPs will support what they call ‘reproductive rights’ and the removal of abortion from the criminal justice system.

“This would result in a major overhaul of the 1967 Abortion Act and would in effect mean abortion on demand.”

The Dundee-based minister added: “The Greens want better information to be available for women in all areas of Scotland. We agree with this latter request, although we suspect that the Greens would not agree that women should be given the information that abortion is the taking of a human life in the womb.

“Science and society has indeed moved on. We are now more aware than ever of the human life that is within the womb.

“For the Greens to suggest that we should facilitate the taking of human life, whether within or outwith the womb, is a chilling development in Scottish politics and suggests not a ‘progressive’ society, but a regression to the practices of the pre-Christian Greco/Roman/Pagan society, where unwanted babies were ‘exposed’ to die.”