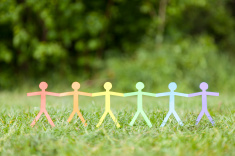 It was also interesting that Stonewall just came up with the usual ‘misinformed’ jibe.  Perhaps next time Stonewall could actually say what was wrong with my statements and give us some facts, and not just the usual glib emotive soundbites?

In an attack on First Minister Nicola Sturgeon and LGBTI campaigners, the moderator of the Free Church of Scotland warned that Scotland’s teachers will be “sent for re-education” as part of proposals he believes will create a “world of confusion, distortion and insanity” where people change gender to “further their career and job prospects”.

In his broadside at the Scottish Government and the wider political establishment, Rev David Robertson – who has a reputation for making controversial statements – stressed the policy will bring “untold disaster and harm upon Scotland’s children”, describing it as “nothing less than state-sponsored indoctrination of the weakest and most vulnerable members of our society”.

Sturgeon has vowed that, should the SNP be returned to power after next month’s Holyrood election, it will look to overhaul gender recognition law for trans people, including those of non-binary gender. LGBTI campaigners have given a warm welcome to her plans, while other parties have pledged similar action, with Scottish Labour saying it would remove the psychiatric diagnosis requirement from legal gender recognition.

However, Rev Robertson, named last year as among the 100 most influential Christians in the UK, said parties across the UK were in a “progressive race to the bottom” over the issue, but reserved scorn for the SNP, stating: “We are not in a society where ordinary people run anything. We have government by the 1 per cent for the 1 per cent.”

In a comment piece for Christian Today, he said that “no-one dares challenge the narrative” of LGBTI activists and argued that, given four of the six party leaders are gay, “it is a little difficult to claim the mantle of the persecuted minority”.

Catherine Somerville, campaigns manager at Stonewall Scotland, said that it was “really sad” to see Rev Robertson’s “misinformed opinion” about changes “designed exclusively to improve the lives of some of the most marginalised people in our society”.