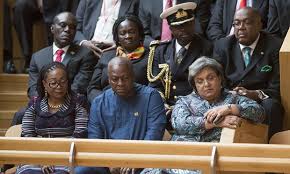 As noted in our Solas Newsbrief  the president of Ghana visited Scotland last week.  And several of our politicians managed to embarrass our beloved Scotland.  Partick Harvie leader of the Greens complained about the President coming and wrote to the presiding officer ”

“We believe that the Scottish Parliament should be a place where everyone can feel safe”.

I have come across some dumb statements in my time but this one deserves to go in the top ten.  Really?  Are LGBT+ people in the Scottish Parliament really ‘unsafe’ because the President of Ghana comes to visit?   The fact that we have elected representatives spouting such nonsense is deeply depressing.  Of course Patrick Harvie was not cowering in fear because his ‘safe space’ had been violated – anymore than he was doing so when I addressed the parliament last week! (actually maybe he was…I didn’t see him there!).  He is just using the language of ‘hurt’ in order to bully and exclude those who don’t accept his agenda.

But Ruth Davidson was even more embarrassing.  The leader of the Tory party refused to clap the President and made her opposition public.  In my view her actions (along with those of Partick Harvie and some other MSP’s) were rude, childish, hypocritical and indeed came with more than an alarming tinge of racism, that comes from the moral superiority of the white liberal elites, who just know that they are at the top of the progressive evolutionary tree.    Ms Davidson belongs to and supports a party which gave a State welcome to the Chinese leader, whose policies on LGBT issues are not that much different from Ghana.  For example the Chinese only this year banned images of homosexual couples in the Chinese media.   Would the Tory leader object to the Chinese visiting the Scottish parliament?   Did she made representations to the British government about the Chinese being given a State welcome to the UK last year?   If not why not?  Why protest about Ghana and behave in such a rude and ignorant manner?  I am all for standing up for principle, but not what it is selective and hypocritical.

And its not just me.  The Green’s, Tories and Nicola Sturgeon have in their petulant display of ‘virtue signalling’ done harm, even to the cause they are supposed to be espousing.  It has backfired back hone in Ghana.  One LGBT activist in Ghana wrote about the harm their actions had done.

These uncalled for statements and pressure has set us back, now the government and the LGBTI community will come under the spot light and any work with the government is in jeopardy, as politicians have already started to exploit the issue for election purposes. Just because Ghana is an African nation doesn’t mean all countries are alike – our community should have been consulted first about what we need, rather than what politicians in Scotland felt is needed. We do not need a white saviour complex but concrete and specific help. I also note that it was the UK, under colonialism, that introduced the anti-LGBTI legislation, maybe this is something our allies in Scotland need to think more carefully about.”

But that is the trouble with our moralistic politicians.  Not only do they want to impose their particular morals on their own people, they are so convinced of their superiority that they feel they have a right to impose them on the whole world.   Liberal Colonialism is alive and well!

I have a sneaking suspicion that in the terms of biblical teaching, Christian civilisation and morals, in the future it is going to be the Africans and the Chinese who are sending missionaries to us, helping us out of the endarkening that we are creating for ourselves.  Meanwhile if by any chance, the Ghanian President happens to read this, can I as a Scot, apologise sir, for the rudeness and discourtesy of some of our politicians. We are not all like that.  You are welcome here.  Haste Ye Back.