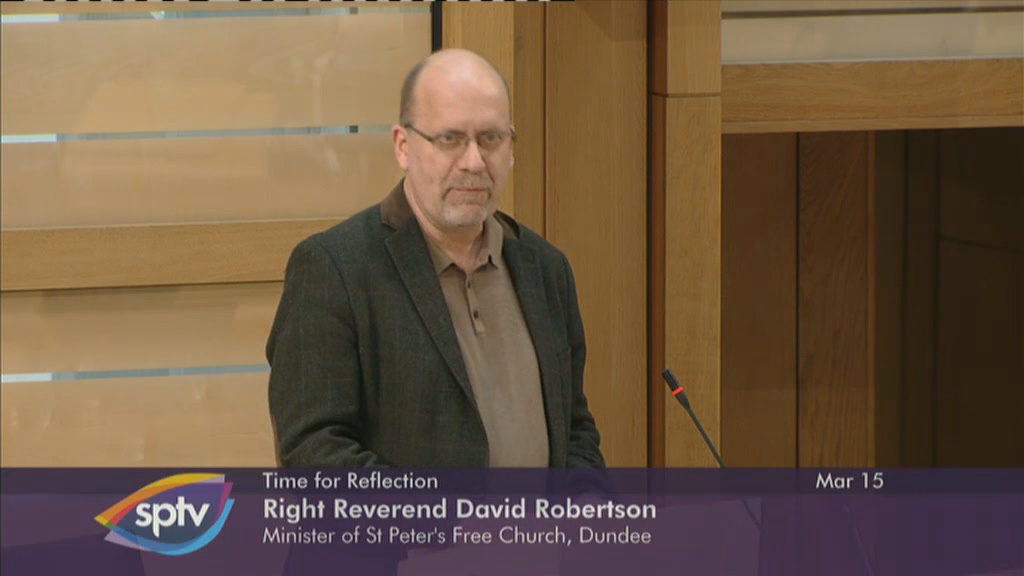 This is the full text of the “Time for Reflection” I gave today at the Scottish Parliament.

Presiding Officer, Members of Parliament, as a Free Church minister I think I will find this difficult to keep to four minutes – but we believe in miracles…

As Moderator of the Free Church I bring you prayerful greetings from our growing denomination.

As you know the relationship between church and state has sometimes had a troubled history in Scotland.  My own church was formed as the Church of Scotland, Free, because of the intrusions of the state into matters that were none of its business.

In the 16th Century, there is the story of the famous encounter between Andrew Melville and James VI in Falkland palace. Melville told James  ‘You are but God’s sillie vassal” before going on to inform him,

“Thair is twa Kings and twa Kingdomes in Scotland. Thair is Chryst Jesus the King, and his Kingdome the Kirk, whase subject King James the Saxt is, and of whose kingdome nocht a king, nor a lord, nor a heid, bot a member!”

I would submit to you that the church in Scotland has been the most radicalising, equalising, democratising force in Scottish history.

I realise that we live in different times and that not every member of this august body is a member of Christ’s church (yet!), but we do need to work out what the role of the State and the Church is.  From our perspective we do not believe the Church has the right to tell the State how to govern – except in the most general principles.  We do not want a theocracy.   We all have our opinions as private citizens but as public bodies the churches do not have the right to tell you, our elected representatives, the rate of tax, whether we belong to the EU or not.  Our role is to pray for you, to serve the poor, to preach the gospel of Jesus Christ and to have a ‘prophetic’ witness – to challenge the powers that be.

History teaches us that when the church seeks to run the government, or the government seeks to control the church, trouble awaits.   Just as the Church should not seek to govern politics, so the State should not seek to act as God.  But we can work together in partnership now, as we have done in the past on vital issues such as education, welfare provision, and health care. The teaching of the ‘Twa Kingdoms’ is not just an important part of our common history but an excellent model for today.  It would be good of us all to recognise that we are all servants of God, but in different interlocking kingdoms.   The relationship of the Church and the State in Scotland should be that of good neighbours and good friends.

I pray that you will know, individually and collectively, the presence, peace and power of Jesus Christ.