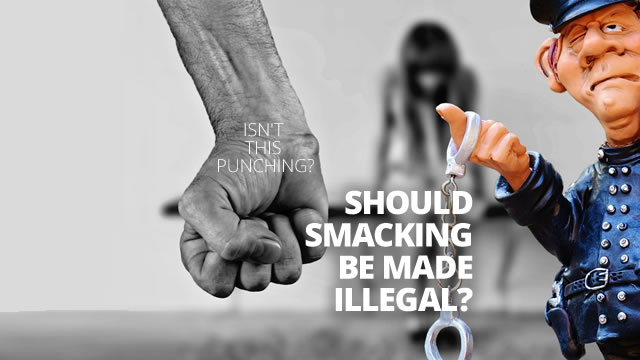 Spare the Rod and Spoil the Child, use the Hand and go to Jail

The Liberal Democrats are putting it in their manifesto. The Children’s minister, Aileen Campbell says she wants it. And Tam Bailey, the Children’s commissioner for Scotland regards it as essential.   So that’s it. The great and good, backed up by ‘research’ have told us this is what a ‘progressive’ society does and so it is inevitable that ‘progressive Scotland’ will follow.   We are of course talking about smacking.

In Scotland it is already illegal to use a physical implement so smacking here means giving a child a tap on the hand or a smack on the bottom.

Listening to Tam Bailey speaking on the BBC this morning was depressing. This is a man employed by the State to help look after our children and he advocates the criminalizing of parents who discipline their child.   But it was worse than that – what disturbed me as the lack of logic and common sense in his comments.

Could and Does – Spot the Difference?

He argued that ‘research’ has shown that ‘routine smacking can actually lead to damaging consequences’. He continually used words like ‘could’, ‘can’, ‘and may be’.   But that ‘could’, ‘can’ and ‘maybe’ does not mean ‘always does’.   Let’s put it another way. You would not say, ‘Feeding a child arsenic laced cakes could cause the child harm.’  It does cause the child harm.   Of course it is true that anyone who physically abuses their children has used physical force but that does not mean that any one who uses physical force is an abuser.

Mr Bailey then went on to say that the intention was not to criminalise parents but to try and ‘encourage behaviour change’. I almost choked on my coffee when I heard this particular piece of newspeak. Mr Bailey, the Liberal Democrats and the mainstream children’s charities are proposing making all smacking illegal. If they get their way then someone who smacks their child will be guilty of breaking the law. They will, by definition, be criminalized.   If Mr Bailey wishes to encourage different behaviour then let him do so. Making criminals of loving parents who are not abusing their children, is a totalitarian way to behave and the wrong sort of ‘encouragement’.  Ironically we will end up in the situation where the State, in order to teach parents that physical punishment does not work, will use physical punishment in order to ensure that parents get the message. Fining people, criminalising people and putting them in jail, is a form of physical punishment.

Should the State punish anyone?

Which brings us on to another conundrum that the Scottish government find themselves in. They state: “We do not support the physical punishment of children.” Does this mean that they support other types of punishment or no punishment at all? If the latter then they are not a government – because by definition government makes laws and punishes those who break these laws. And they do punish them physically – putting people in jail is a physical punishment. If the Scottish government believes we should have an army and a police force then they believe in physical force as an effective deterrent. The question they then need to answer is why it is an effective deterrent for the State to use to discipline its citizens, but not one that parents can use to discipline their children?    If the argument is that physical force by parents ‘could’ be misused, then that same argument applies for the State – which has often misused physical force. Does the misuse of physical force by the State mean that we should have no army or police?  If not then why does it mean that parents should not be allowed to use physical discipline?  Perhaps our baby boomer politicians really do believe that ‘all you need is love’?

Assuming that the Scottish government do actually believe in some kind of punishment, then I find it somewhat strange that they support psychological and emotional punishment, but not physical.   What if physical was the less harmful?   I remember at school preferring getting the belt rather than detention, because at least the belt was over quick (I think by the way, that for that reason it was not a very effective form of discipline!).   Is a short sharp smack on the hand worse than being sent to one’s room, or shouted at?  Does smacking lead to the child becoming a serial killer, whereas being sent to the ‘naughty corner’ leads to the child becoming a well adjusted model citizen of Nirvana?

And there is yet another difficulty with the simplistic position taken by the Children’s’ commissioner. Why stop at smacking? If it can be abusive and harmful to children, what about other parental behaviours which ‘research has shown’ could do even more harm? Should we make it illegal for parents to let their children access the Internet, watch violent videos, or take them to McDonalds?

The trouble is that the people who make these laws are being serious.   They are living out the fantasies of their Disneyland philosophy. Human beings are basically good, if only we treat everyone really nicely, then everyone will be really nice. It is a dangerous and dumb doctrine.

Let me share one example of how this works. Many years ago I went to help at a council youth club in the Tollcross area of Edinburgh, which then was pretty rough. As we were holding a disco in one of the rooms, a couple of the teenage girls came up to me and said that one of the boys was trying to set fire to the chairs. I went over to stop him and he took a swing at me. I restrained him and took him to the two social workers in charge. ‘You can’t do that,’ they said. ‘We don’t believe in using physical force. Let him go’. So I released his arms, and he punched them!   He was of course expelled and left to wreck havoc on the streets of Edinburgh with his gang. Perhaps a little bit of appropriate restraint at that time would have prevented a greater restraint (prison) in later years?  What you or I believe is at best irrelevant, and at worst harmful, if it does not correspond to reality.

One of the callers on the BBC discussing this said, “If we ended all violence against children we would have world peace within 20 years.” So because you give your child a smack and they learn to listen to you, not to run in front of a lorry, beat up their little sister or electrocute themselves, you are a danger to world peace!

But….and this is a big but…the church should not advocate physical punishment as the be all and end all.   We need to state very simply that we are opposed to all forms of abuse, whether physical, emotional or psychological.  And I should add that those who use the church or the bible as some kind of cover up and excuse for their abuse should be dealt with by the full force of the law, and in my view deserve the lowest place in hell. Harming children is an absolute sin against an Almighty and Holy God who loves and cares for his children.   That is why the cover up of sex abuse within the Catholic Church was so heinous and why any church which does not immediately report such abuse to the authorities deserves to feel the full force of the law.

Personally I agree that there is great danger in using physical implements to hit a child. Spare the rod is not a command to hit children with an implement.  It is a command about loving, appropriate and contextual discipline of a child.    There are basic principles that need to be applied. Physical discipline should never be done in anger and should never become abusive.

We also need to recognise that there are varieties of children and varieties of parents. Some parents never seem to have any problems, others always seem to be at the end of their tether.  This is as often down to temperament, character and circumstances, as it is to parenting style.

The government has a duty to help prevent abuse and to deal with those who abuse. It does not have the right to micro-manage the family and set up a one size fits all state approved parenting programme. Ironically in the long term, the proposals of the Liberal Democrats and the Children’s Commissioner are more likely to harm children than to help them.

This article appeared in Scotland on Sunday yesterday:

SCOTTISH parents are being urged to argue against a ban on smacking children by family campaigners in New Zealand where it has been outlawed for the past decade.

The Family First organisation has warned that the 2007 ban has not resulted in any improvement in children’s “wellbeing” – and in many cases it has worsened.It is now offering to advise Scottish opponents of such a move here after children’s minister Aileen Campbell recently hinted that ministers are considering a ban.

Campbell revealed that New Zealand was among the countries that the Scottish Government is now looking to “learn from” in its approach to tackling physical punishment of children. Ministers in Scotland say they oppose smacking but have no plans to legislate until a full consultation is carried out.But Family First New Zealand, in an article for Scotland on Sunday today, warns that the move may be more about “political ideology” then the impact on families.

National director Bob McCoskrie said the group has already been in contact with politicians and family organisations in Scotland to discuss New Zealand’s experience. He warns in today’s article that the New Zealand ban has not been a success.

“The problem is that politicians and anti-smacking lobby groups linked good parents who smacked their children with child abusers – a notion roundly rejected by families,” he states.

“A law change would also communicate the message that politicians don’t trust Scottish parents to raise their own children responsibly.

“Ultimately, as we have observed, the supporters of smacking bans are influenced by political ideology rather than common sense, good science and sound policy-making.

Parents in New Zealand now report they increasingly face threats from younger children to report them if they are smacked. About a quarter of parents now say they are less confident in tackling unacceptable behaviour of children. In Scotland, although physical punishment of children is classed as assault, smacking is generally allowed under the defence of “reasonable chastisement”. A growing body of children’s campaign groups and academics want to see this defence removed.

Rev David Robertson, moderator of the Free Church of Scotland, said he was opposed to any form of abusive behaviour towards children, but added that an outright ban on smacking was “over the top”.

He added: “To criminalise parents who may be good and loving people and are only looking out for their children is just daft and is just another example of the moral thought police approach.

“It seems to me that the evidence for a smacking ban is very limited. It’s something you should do rarely, but in some instances you could argue it may be more abusive not to discipline a child.”

A Scottish Government spokeswoman said last night: “We do not support the physical punishment of children. In line with our Parenting Strategy we will be developing comprehensive, practical advice on different approaches to support parents in managing their children’s behaviour.”