A few random thoughts enroute to the USA for the Basics Conference at Parkside.

The United flight from Edinburgh to Newark is convenient, shortish and at a great time.   However I don’t think I have ever come across a worse airline than United.  If I ever come back to the US I am tempted to go to London and fly BA.  United cabin staff seem so scruffy, surly and have that ‘I can’t wait to get this shift over’ attitude.  And the plane is cramped!   It was also a bit of a pain sitting up the back with a group of Glaswegian wummin on their way to a Hen/Birthday weekend in NY.  For the first three hours they never stopped talking (and drinking) – their voices were so loud and shrill that the headphones did not help much.

We arrived in Newark at 11am local time, and took the train into Grand Central.  I was amused that we were in the ‘quiet coach’ which is apparently the ‘silent’ coach.  You are not even allowed to whisper to your neighbour.  Obviously the influence of the Trappist Monks extends further than I thought.  The guard who warned us not to talk did not see an inconsistency in himself sitting in the coach and letting his walkie talkie blare out at full volume.

In New York we stay at Hepzibah house on the Upper West Side.  Its a totally lovely place – set aside for Christian workers. We have been here four times now and kind of regard this area of NY as ‘our’ neighbourhood.  I love walking round and seeing the variety of life.  The Latino nannies walking the babies, and the yuppies walking their coiffured dogs.

Thanks to friends on FB, we heard about the Frick collection which was just across Central Park.  It was stunning.  For me visiting here was one of the great experiences of my life.  I loved the house, the fact that the gallery was small but it was the paintings that stunned me.  Boucher, Gainsborough, Goya, Rembrandt and Turner.   Beautiful.  Beautiful, Beautiful.

We walked back through Central Park.  It was a beautiful day and it was so fascinating to observe again the dog walkers (we ate at place, Shake Shack, which even had a dog menu), the yummy mummies, the rich gay couples and hear the Jazz musicans, the Chinese classical and the ballerina! 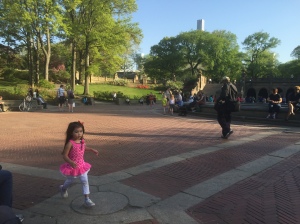 We are staying near to the Dakota building where John Lennon was murdered.  Just over from that there is a part of Central Park which is dedicated to Lennon- entitled of course ‘Strawberry Fields’.  It has become a place of pilgrimage and its quite sad to see.  The tacky souvenirs and the buskers seeking to make money out of singing Beatles songs are a bit disconcerting. I think that Lennon may have ‘imagined’ there was no heaven, but the constant singing of ‘Imagine’ is surely proof of purgatory!

I was stunned to get the exit poll which showed the extent of Labours defeat in both England and Scotland.  I was even more shocked to realise that cyber capitalism had caught up with me as well – the data charges are ridiculous and exploitative but I really had to see what was going on back home.  Thankfully we managed to find WiFi before I bankrupted myself.
I am very thankful for the Lords provision in allowing us to be here.  We have had a great day together.  I think New York is both my and Annabel’s favourite city.  There is a vibrancy and dynamism which is stimulating and fascinating.  If you like to ‘people watch’ then I cannot think of a better place to be.  New York demonstrates both the best and worst of humanity….looking forward to tomorrow…