This is my final blog from Oz – although to be strictly accurate I am writing it as we fly over Tehran. We left our hotel at 5pm Thursday and by the time we get home to Dundee, it will have been 41 hours from door to door. Australia is a long way away – or if you don’t regard Scotland as the centre of the world then I guess people might think we are a long way away.

It has been an incredible trip. I have tried to convey something of it in these blogs and am thankful that so many people have been in touch to say how much they have appreciated them. We are very conscious of the Lord’s hand upon us in these days – and the last couple of days in Sydney were no exception.

Centre for Public Christianity
Occasionally I have met one of my heroes, people who I admire and whose work I have benefited from, and it turns out that they are not quite so heroic after all. So it was with a little degree of trepidation that on Wednesday morning we headed into the heart of Sydney to meet with John Dickson and the staff of the Centre for Public Christianity. John’s Life Of Jesus is one of the best evangelistic tools on the planet, and deserves to be more widely known. The CPC produces many excellent materials and has a significant impact on the Australian secular media. Their work has been recognised by the Australian Bible Society who are now their major backers. When Solas CPC grows up – we want to be like them! John was just as I hoped he would be – informative, stimulating and a like-minded brother in the Lord.

And the Australian CPC is sorely needed. An indication of the needs was given when we visited the massive Dymocks bookstore on George Street. It has more than 100 sections spread out over three floors but only two were on religion. The Christian books were pathetically few and those that are actually worth reading were even fewer. If it were not for CS Lewis and Tim Keller the gospel would hardly have been represented at all.

Chat Thai
Another highlight was the restaurant we ate in on Wednesday night. We came across Chat Thai because of Trip Advisor It is a cheap but wonderful genuine tasty Thai food. We had to queue to get in – but it was well worth it. The two portions we had were enormous and we were not able to finish them. I was stunned at the somewhat obese woman sitting at the table beside us – who, as we left, was starting her fifth and sixth dishes.

Some final observations about Aussie food….it has been excellent! The wine is cheap and good, the beer expensive and rubbish! And one odd fact – apparently McDonalds feel free to call a burger a McAussie Burger if it has beetroot in it.

The Beautiful People
Many of the people we saw on the streets and on the tube were what might be termed the ‘beautiful people’. Immaculately dressed and coiffured – the sharp smart shoes and designer outfits all added to the sense of style and class. Milan would have been proud. And there were the impossibly bronzed and muscled young men who made sure they were seen running half naked through the streets. I suppose the motto is ‘if you’ve got it, flaunt it’. Yuppiedom is alive and well down under.

Café Lindt
One place where the ‘beautiful people; hang out is Martin Square – and it is there that we passed the boarded up Café Lindt – the scene of the tragic siege where several people died. Australia, like other Western democracies, is struggling in trying to work out how to cope with Islamic radicals. It was a constant item on the news during our visits. On our last day Circular Quay, at the centre of the city was in lockdown because of a suspected bomb on a boat, which eventually turned out to be a false alarm. 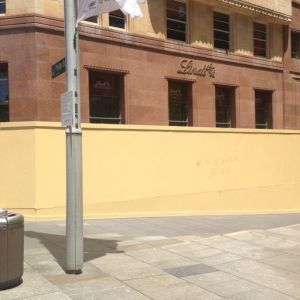 A couple of things in the Sydney Morning Herald saddened me. Some of those who were involved in the Café Lindt siege were reported to be selling their stories for as much as $400,000 to the media. I don’t know which is worse – the people for exploiting for financial gain the tragic deaths of their colleagues and co-workers, or the media for setting up this perverted auction.

And then there was a dreadful column op-ed piece by Elizabeth Farrely. It was so bad I am going to keep the details for a response article, but suffice it to say that the white, liberal, godless, wealthy middle classes here are as intolerant and arrogant as they are in Britain.

The Jewish Museum
Speaking of intolerance. There is an absolute must visit in Sydney – indeed it is something that is worth going to the city just to see – and that is the Jewish Museum. We spent over three hours there and could have spent many more. I met a wonderful 88-year-old woman who was one of Josef Mengele’s ‘selections’ in Auschwitz. It was humbling and deeply moving talking to her. Again I learned so much about Judaism that I am going to do a full write up at a later point. One fact thought that may interest you – apart from Israel, Australia was the number one country in the world per capita for taking Jewish refugees. God bless them for that…in fact He has done – that is maybe part of the reason why it is such a wonderful country.

Scottish Australia
Anyway we have now left. I hope in the providence of God we will be able to return. A holiday which started out with my collapsing in Heathrow, ended up as being one of the best we have ever had. Australia is a massive country of which we only scratched the surface – yet even from that it is clear that it is a special bless. How can you not love a country where there is so much historic Scottish influence (McQuarrie, Sutherland, Campbell St and other place names indicate the Scottish heritage – they even have a town called Robertson!); where the motorways have cycle lanes, and they have shark planes overseeing the beaches?!

There is much in Australia to make you smile (yesterday’s headline in one outlet was ‘Pope upsets German Rabbit Breeders!’), and be glad for the many gifts of Gods Common Grace. Australia is a Western country with its face increasingly turned towards the East (17% of Sydney is of Chinese origin). It has many problems as well as opportunities. It is changing. May it be that the Lord’s people there are able to be salt and light.