I had an interesting conversation with Nick Franks on his and his wife Mairi’s podcast – Into the Pray.  We did not agree on everything as we looked into the decline of the church in the UK in general and Scotland in particular…

This is Nick’s intro: 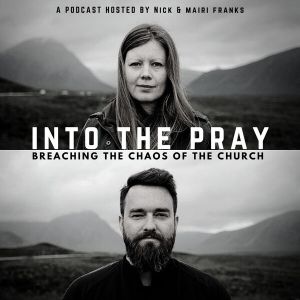 This week on Into the Pray we are very grateful to talk with David Robertson (aka The Wee Flea), former senior minister of St. Peter’s Church in Dundee and now Director of Third Space in Australia.

David and Nick produced some videos a couple of years back about some critically important issues relating to both the Church and the socio-cultural disintegration that we are all witnessing today. (You can find those via Nick’s YouTube channel).

In today’s podcast, David says, “Scotland has descended and secularised quicker than any nation in history.”

If this is true – and it may well be – the British Church need to recognise that a proportional response of humility, repentance and prayer is the gracious, God-given order of the day, not harking back to previous times in our history where a genuine call to repentance may or may not have been issued or nationally observed.

During the reign of King George 73 years ago, marriage still meant in British law what God says it means, millions of people hadn’t been torn limb from limb via the horrors of abortion and our children weren’t being told that they could select their gender or experiment safely with pornography – we have to get real!

David and Nick may not quite see eye to eye on the place and responsibility of the Church in this particular conversation but they do both agree that until we corporately “come to the end of ourselves” (the exact focus of the book, Body Zero) there can be no hope for reformation, renewal or revival.

What&#8217;s Gone Wrong? The State of the Church in Scotland today