Five years ago yesterday I voted for Scotland to become an independent country – when the result was announced I remember it being a grey and dreary day in Edinburgh – weather that reflected my mood at the time.  I made the mistake of believing what our politicians had said – this would be a ‘once in a generation’ opportunity and so I thought our chance had gone.

Five years on, how do I feel?  I hate to say this but even though I still want Scotland to be independent, I think we dodged a bullet – and right now if we had another referendum (which by the way I don’t think we will – its all hot air and bluster from the SNP, seeking to keep the troops on board), I’m pretty sure I would vote the other way.  According to this article in the Scotsman 36% of Yes voters have now changed their minds and would vote no…that’s over half a million votes.   I would be one of those who have changed their mind from Yes to….perhaps maybe….or even no.  Why?

As this BBC article explains – a lot has changed in the past 5 years.  Not least the SNP.  What was once a party seeking Scottish Independence, with a wide variety of other views within it, has now morphed into a pro-EU, ‘progressive’ and somewhat authoritarian party.   The influx of tens of thousands of new members are tightly controlled – as are all its politicians who have to sign an agreement that they will not disagree with any aspect of party policy. 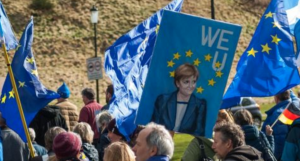 To commemorate the 5 year anniversary Nicola Sturgeon sent out this message.   I agree with her observation that the 2014 referendum was a dynamic and stimulating time.  But the rest is, at best, nationalistic hyperbole.   No, the debate is not as ‘vibrant’ as ever.  In fact, apart from those who spend their weekends attending various Yellow Lodge marches, the debate has become stale, fanciful and vitriolic.

She speaks of ‘Scotland’ saying no to Brexit.  A statement which demonstrates what is wrong with the SNP and the Scottish government.  It is factually inaccurate…Whilst 1.6 million Scots did vote for the UK to remain in the EU, 1 million of us (including 400,000 SNP supporters) voted to leave….and 1.6 didn’t even bother to vote.  This is hardly ‘Scotland’ – although the SNP often confuses ‘Scotland’ with itself.   In fact, Scotland as a nation did not have a vote.   We had voted to remain in the UK and it was the UK that had the EU vote.  For the SNP to take the 1.6 million votes (many of them Labour, Liberal and Tory Unionists) as a reason for them to speak for ‘Scotland’ in seeking independence is breathtaking arrogance.

Although Sturgeon ‘believes with her heart’ that Scotland will vote Yes the next time – she needs to use her head a bit more.   Sadly her fixation with the EU has dealt a body blow to the hopes of Scotland being independent.  For two reasons.  First of all her unilateral decision (made in conjunction with her husband, Peter?) to support a 2nd Brexit referendum is a tactical error of monumental proportions.  IF (and it is a big if) there was a second Indyref, and IF (an even bigger if) Yes were to narrowly win it – a precedent has now been set.  The rest of the UK would make leaving the EU seem simple in comparison – and then it would need to be put to a ‘confirmatory’ vote.

Secondly the idea of independence in the EU is an oxymoron.    Guy Verhofstadt kind of let the cat out of the bag when he indicated the purpose and aim of the EU – to be an Empire.

It’s not just the Lib Dems who have turned into the EU Empire Party – so have the SNP….cheering on an organisation which has just appointed an immigration minister whose title and purposes includes ‘defending the European way of life”!  Can you imagine the self-rightous anger that would come from the Scottish political class if Boris Johnson had appointed a minister for ‘defending the British way of life’.  Racist would be the least of the condemnations.  But when the EU does it – silence of applause. The SNP have now become the EUNP – wrapping themselves in the EU flag as much as the saltire.

The trouble is that many SNP politicians and supporters don’t seem to actually know what the EU is.  The slogan ‘an independent country in an interdependent Europe’ misses out the most salient fact about the EU.  It is not an international body of national countries co-operating together (or even as Angus McNeill, MP, tweeted just a trading body) – it is a supranational body which has authority and power over national parliaments.    This is a very strange definition of Independence.   The SNP in effect want to take us out of one Union and lead us immediately into an even bigger one.  It shows the level of the EUmania that has gripped so many that with the honourable exception of a few (Alex Neil, Jim Sillars, Jim Fairlie – and a few others who are too scared to raise their heads above the parapet), the policy of Scotland becoming part of the EU empire is deemed sane, rational and ‘progressive!

There are other reasons why I am now so reluctant – the authoritarianism of the SNP, the shambles that the Scottish government is making of our NHS and education.   But it is the betrayal of Scotland’s fishermen (whose votes and communities first gave us a significant SNP MPs), the kowtowing to Barnier, Juncker etc, and the alliance with Blair, Campbell, the Lib-Dems, and the Remainer Tories which really sticks in the throat.   The SNP have sacrificed Scottish Independence in favour of EU dependence.  It’s almost as if they are scared of real political responsibility.

When I see the way that the Scottish government now governs, with its increasing incompetence and authoritarian progressivism, I look back on 2014 and think that we not only dodged a bullet, we dodged a bomb.

AS I find myself saying more and more….Lord, have mercy!

Here is the post I made five years ago on referendum day….the ending is I think still apposite:

My diary has today marked as ‘Independence Day’. I accept that is a bit optimistic and unlikely but nonetheless I am glad to have the opportunity to vote for a new start for Scotland (despite Gordon Brown telling me that I am not one of the ‘real people of Scotland’!). I believe that this country needs a new beginning, but I know that there are many of my friends and Christian brothers and sisters (who are also the ‘real people of Scotland) who will vote otherwise. And tomorrow we will all get on with the real work of the Kingdom. Together. I don’t believe that the UK is eternal or that any choice we make today is eternal. There is only one choice that is eternal. Nevertheless today is important for the present and immediate future. The lot is cast, and is in the hands of the Lord. God is sovereign and our hope is in Him.

For me these words of Psalm 80 are appropriate for both Scotland and the UK.

1 Hear us, O Israel’s Shepherd, Joseph’s guide,
The one enthroned between the cherubim.
2 Show forth your splendour to the threatened tribes,
Manasseh, Benjamin and Ephraim.
Come to our aid, O God, stir up your might;
3 Restore and save us! Shed on us your light!

4 LORD God of hosts, when will your anger cease
To burn against the prayers of your folk?
5 For food and drink you give them endless tears;
6 You make our neighbours rage and enemies mock.
7 Come to our aid, O sovereign God of might;
Restore and save us! Shed on us your light!

15 This vine, this root, which by your own right hand
You planted for yourself, you now have spurned.
This branch, this son, whom you raised for yourself,
16 Has been cut down and in the fire is burned.
Your people—those whom for yourself you took—
Are perishing because of your rebuke.

17 Your hand place on the man at your right hand—
The son of man you raised up strong and true.
18 Revive us; then we’ll call upon your name,
And we will never turn away from you.
19 Come to our aid, O sovereign God of might;
Restore and save us! Shed on us your light!

An Emotional Decision – Reflections on the Scottish Independence Referendum