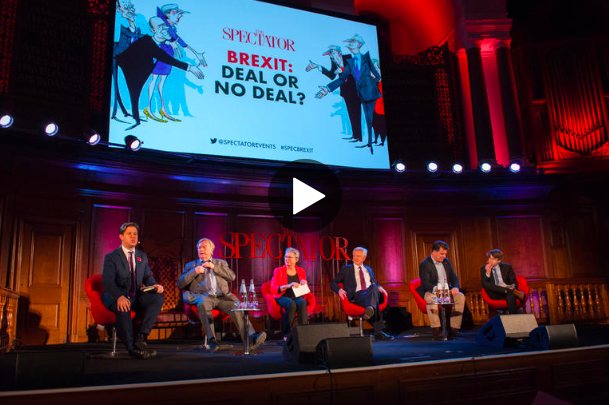 Before we go on to look at chapter six in The Great Deception – which is a fascinating insight into the formation of the EEC and Britain’s growing interest in joining up to 1961.  Again the historical background really lets us get the bigger picture of what is going on today – speaking of which, the Brexit farce continues.   Here are a few developments and articles that may help.

The most important development is the decline in both of the main German parties in the region of Hesse.  The vote there prompted Angela Merkel to announce she was going to retire from being head of the Christian Democrats and would not run for election as Chancellor again.  The rise of populism, even in stable Germany, and the removal of Mutti….is of enormous significance.  Probably not for the better.

Pride of place this week goes to an Australian former Prime Minister, who in this superb article in The Spectator explains how Brexit could/should work.  Contrast that clarity with the confusion surrounding the Prime Minister and her Chequers plan – as Andrew Neill satirised it – “We have a backstop to the backstop, a transition period, extended transition period, even the possibility of an indefinite transition period! And regulatory alignment, something we only ever dreamed of until the Maybot made it a reality.”

Each week brings an increasing level of hysteria from the EUphiles who really do believe that we are all doomed if we leave Nirvana – The latest article in The Daily Mail (which since its change of editor has become much more pro-EU and thus more acceptable to the liberal elites) warns us that Brexit could kill 5,600 people because it would cause the price of vegetables to shoot up and thus stop us dedicated Veggies from buying our potatoes and carrots!

Meanwhile each side continues to accuse the others of lying/cheating.  It appears that the self-styled Peoples Vote campaign (I love the description in one magazine of their march as the longest Waitrose queue in history!) have been accused of exaggerating the figures on their march and also of misusing Facebook advertising.   Doubtless the Russians are still ardent pro-Brexiteers as well!

But by far the best Brexit thing this week was the Spectator debate…with Ken Clarke, David Davies, Gisela Stuart and James Forsyth in top form….take your time to listen to this.

But lets return to The Great Deception….

“Great Britain has lost an empire and not yet found a role” Dean Acheson, speech to West Point

The first declared aim of the new European economic community was to establish a common market amongst its six members based on the four freedoms – freedom of movement, of goods, services, people and capital.  We think we are familiar with these terms today and know what they mean.  But there are two important caveats to these four ‘freedoms’ that our pro-EU politicians never tell us.

The EEC had an aim of full political integration and ever closer union.   The means to do this was known as ‘engrenage’ ‘gearing’. A gradual ratcheting up of the process of integration over an ever wider field. There were three ways that this could be done.

The first was to use the power seen through the treaty to make laws, reinforced by the judgements of the new European Court of Justice. Each time a power or competence agreed in the treaties was exercised in passing a new law or regulation this transferred power in that policy area from nation states to the supranational authority. The second was to pressure national governments into extending the integration process into areas not covered by the Rome Treaty. And the third was to expand the size of the community. It was fascinating to me that these three aims have been consistent right up to the present day.

The first Council regulation on 15 April 1958 established French, German, Italian and Dutch as the official languages of the communities.  On 19 March 1958 the hundred and 42 member European assembly, made up of delegates from national parliaments convened in Strasbourg.

One thing I did not know was that even at this early stage monetary union was seen as key.   Monnet was especially keen. In September 1957 he wrote “Europe could become political in five years through money”

The Problem of Britain

Monnet wanted to tackle the only major power he thought could prevent his supranational government – Britain.

Britain wanted a free trade area but the French made wholly unacceptable conditions not least that Britain end its preferential trading agreements with the Commonwealth. The whole scheme collapsed.

Monnet  set out to destroy both this and  the OECC -which was seen as the embodiment of the British concept of European unity: cooperation without political commitment. The United States and the French helped Monnet achieve that ambition.  Again remember that the EU is at least partially a creation of the US.

Monnet also sought to undermine EFTA. And was able to do so because the United Kingdom was having a crisis of confidence. Britain had moved from being a true world power in 1945 to being severely weakened. Her car, textile and coal industries were still the largest in Europe in 1950 and it was still the world’s leading shipbuilding nation.   But this was not the case by 1961.  Suez was a disaster,  India and much of the Commonwealth was lost.  Britain was losing its power and status.  The idea began to be spread within Whitehall that as Britain gave up its Commonwealth it needed to unite with the nations of Europe.

Civil servants and others began to argue that if Britain was on the inside it could influence the policy of the six although they admitted that it was not possible to judge how great their influence would be.   I found it fascinating that again Edward Heath was involved – he was at this time the minister of state for Europe –

Harold Macmillan was the Prime Minister. When Heath visited Hallstein- the first president – it was made clear to him that the EEC would evolve into a much more the federal state.  It is strange that neither Heath nor MacMillan made much mention of this in their memoirs.   I suspect because they knew how unpalatable it was to the British people.

On 30 March 1961 a major meeting took place between George Paul, President Kennedy’s under Secretary of State with special responsibility for European affairs (one of Monnet’s key men).; Frank Lee, and Edward Heath. At this meeting it was made abundantly clear that the Americans expected and wanted the United Kingdom to join the EEC and for it to turn into a European Federation.

Macmillan informed the Cabinet that he intended to apply to join the EEC. He told them that the chief way in which the problems of public relations might be overcome would be to stay as quiet as possible about the political objectives of the treaty and to sell British membership of the common market as if it was primarily a matter of economics; improve trade, more jobs, great prosperity.  The Cabinet voted for entry and on 31 July 1961 Macmillan announced the decision in the Commons – much to the shock of many MPs.

We were lied to in 1961 and we have been continually told lies since then.  It is indeed The Great Deception.  I’m not sure we can blame others for this – it was our own leading politicians who knew the truth but just refused to tell it.

Next week we look at how the French stopped the British joining the EU in the 1960’s.

Meanwhile I leave you with a couple of other developments – Firstly the power of the EU over national governments was seen in its rejection of Italys budget.  Whatever the rights and wrongs of it – if you are in the EU you are no longer in charge of your own economy and your own budget.

And then another insight into the scary lack of intelligence, reason and information in this debate.   As happens too often I got into a wee Twitter spat with someone who turned out to be, according to herself, someone who has lectured in European Law in a University in the UK.  She tweeted this.

For anyone who knows anything about the EU and its workings its a basic that the EU Commission is the political executive of the EU.    It disturbs me that a lecturer in EU law does not know what the EU Commission is or that the EU is a supranational organisation not a collection of co-operative states; and that she is teaching this to students…who will then of course pass on the ignorance through social media.  Thats why its so important to read books like The Great Deception, to know history and to listen to people of different views  like David Davies and Ken Clarke in the debate above.  Ignorance fuels prejudice.  Knowledge may not bring wisdom….but it helps.

(By the way when I pointed out that she was wrong about the Commission – she blocked me!)

The Great Deception Part 6 – The Rocky Road to Rome