Are you not just fed up with Brexit?  Its on every news bulletin as the UK and EU governments move from farce to tragedy.  Social media is filled with people who obsessively post about it and it is clear that many people regard it with almost apocalyptic fervour and dread.  So why continue to comment on it?  Because it is important and because we need to be aware of what is going on.

I like to take the longer term perspective (unlike Mrs May whose problem has been how she can keep her head about water until the next crisis), and that involves looking at the past as well as the present and the future.  It is for that reason that I love The Great Deception and began a series on it – but its been a while…so its time to return.

Each week I will continue with a Brexit update and then a further look at the book and how we have got to the mess we are in.

Theresa May has returned from Brussels with nothing.  Humiliated and about to offer yet more concessions.  The self-styled PeoplesVote are holding a march in London this coming Saturday with various wealthy celebrity backers providing free buses.  The SNP have taken the opportunity to twist the knife again and the Labour party continue their policy of confusion and inaction.   The big problem (allegedly) is the Irish border.  The EU has used this brilliantly with the Irish poodle doing its masters bidding.  The DUP cannot accept anything that looks like an annexation of Northern Ireland by the EU (it looks like it because that is precisely what it is) and although Mrs May will want to in effect remain in the Customs union and Single Market, she cannot accept an unlimited transition period without betraying all her promises and those who voted to leave the EU.  The Peoples Vote is not a solution because in effect it is just the EU doing what it usually does – not accepting the result of a referendum and getting ‘the people’ to vote again, and again…until they get it right.   Because Mrs May has handled this so ineptly the UK is not prepared for a No deal and because the UK parliament is dominated by Remainers there is no possibility of a Canada style deal going through.   It is all an absolute mess. James Forsyth has this brilliant article in The Spectator summarising how May has been played. 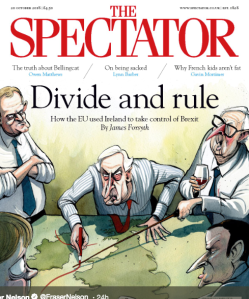 The only people who know what they are doing is the EU technocrats.   The Commission does not have to answer to any electorate and so is free to pursue policies which may cause harm and pain, in pursuit of their ideology.  They can play hardball because they are the ones who make the rules, and they are the referees of their own game.  Mrs May’s biggest mistake (assuming she is not some kind of Maciavellian genius – highly unlikely!) was to assume that the EU would be reasonable and could be negotiated with.  If she had read The Great Deception or Yanis Varoufakis then perhaps she would have been better prepared.   https://theweeflea.com/2017/09/21/will-brexit-happen-the-truth-about-the-eu/

After the Second World War and the establishment of West Germany Monnet saw his chance.  He wanted to create a European Federal State but knew that there was no possibility of that being accepted.  He got the French foreign minister Robert Schuman on board through this important memorandum

“We must therefore abandon the forms of the past and enter the path of transformation, both by creating common basic economic conditions and by setting up new authorities accepted by the sovereign nations. Europe has never existed. It is not the addition of sovereign nations met together in councils that makes an entity of them. We must genuinely create Europe; it must become manifest itself.”

In a  style of working which has become very typical of the EU –  only three or four ministers were informed about the plan and when the Council of ministers met they accepted it without really knowing what it was.  Schuman  then when to make his “declaration” –  and made a public broadcast at a dramatic press conference at 4 PM on 9 May 1950.   today the EU officially commemorates that as Europe day and the Schuman declaration is  lauded as the document which led to the creation of what is now the European Union.  This set up the European Coal and Steel Community which was to become the basis of the EEC and then the EU.  Schuman thought long-term.  But what is key at this point is that the basic principles of how the EU was to operate (and still operates today) was set up.  National governments should be told as little as possible as late as possible, the media should be used and the carrot/stick approach of world peace and economic prosperity were to be used.

Britain refused to join the talks and was not prepared to let its massive coal and steel industries (220 million tons of coal and 16 million tons of steel!)  be subject to a European body.  There was however one British MP who was very much in favour – the young Conservative MP for Bexley, Mr Edward Heath.

Monnet however got his way – and Britain did not join.  Here is another fascinating insight for today’s situation.  Monnet included in the text setting up the Coal and Steel community the following stipulation:

” The withdrawal of a state which has committed itself to the Community should be possible only if all the others agree to such withdrawal and to the conditions in which it takes place. The rule in itself sums up the fundamental transformation which the French proposal seeks to achieve. Over and above coal and steel, it is laying the foundations of a European federation. In a federation, no state can secede by its own unilateral decision. Similarly, there can be no community except among nations which commit themselves to it with no limit and no looking back”

The EU is Hotel California.  You can check out any time you want, but you can never leave.

Meanwhile Harold Macmillan explained why this scheme, which he admired and had a sense of wonder about, would not be accepted in Britain;

“At all events, one fact is certain, and we had better face it frankly. Our people will not hand over to a supranational authority the right to close down our pits and steel works. We shall not permit a supranational authority to reduce a large section of our fellow citizens in Durham, the Midlands, South Wales and Scotland to unemployment. These fears may be imaginary, but their existence is a fact, and the fact moreover, which no British government can afford to ignore.”

Note how times have changed.  The working class have become more marginalised and their jobs are less important than the perks and benefits that the EU brings to the middle classes.  Our elites will happily hand over our economy to a supranational authority especially if it is one that pays them handsomely to do so.   Power has been removed from ordinary people.  Except for when a government is daft enough to give them a say through a referendum.  I suspect that once this referendum is changed or buried it will be a long time before the governing classes let that happen again!

In December 1951 the Treaty for the European Coal and Steel Community was finally ratified.  Not without opposition.  The French Gaullist noted ” instead of delegating our powers to a democratic Assembly, we are asked to abandon an important sector of our economy to a stateless and uncontrolled autocracy of experts.”  Profesor Lavergne complained that the French public hadn’t a clue, the Parliament was presented with the treaty only very late in the day, and that ‘ in most cases the thing was looked at through the distorting prism of a few slogans or electoral prejudices; in many cases most of the deputies voted with their eyes shut”.  As they say in France “plus ca change, plus c’est la meme chose”!

Monnet was appointed the new President of this organisation, based in Luxembourg.    Addressing the first session of the Community’s new assembly, he told the delegates that this was ‘the first government of Europe”