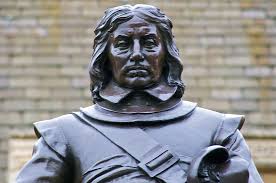 This article was published first on Christian Today –

‘Keep your eyes on the stars and your feet on the ground.’ President Roosevelt’s wise saying still resonates today and would certainly have appealed to Solomon. After considering the question of loneliness, Solomon now turns to politics.

The two are not unrelated. Sometimes our politicians look as though they are very alone. Occasionally I feel sorrow for our prime minister, Mrs May, who looks as though she is wondering which of her colleagues is going to be the one to stick the knife in – Et tu Boris?!

I love the way that the Bible speaks directly to our contemporary situation in the politics of Westminster and the White House, as much as it did in the palace of Solomon. I guess that it is because human nature (and therefore politics) doesn’t really change and because the Bible is God’s Word for all humans everywhere in every time.

Ecclesiastes 4: 13-16 is a difficult passage to translate and understand. It speaks of a king rising to power. He becomes complacent and foolish because he is alone – or at least acts on his own and does not listen to his friends.

Solomon is again drawing attention to the folly of the lack of companionship. His place is taken by a young man who has climbed up the ladder of success – from rags to riches. But he too found that popularity was fleeting. In effect Solomon is warning us that even if we make our way to the top, the only way is down. Even if all our ambitions are achieved, it’s still ultimately meaningless.

Oliver Cromwell, who took the British throne away from Charles I and established the Commonwealth, said to a friend, ‘Do not trust to the cheering, for those persons would shout as much if you and I were going to be hanged.’ Cromwell understood crowd psychology. The crowd that shouted for Jesus to be made king as he entered Jerusalem was the same one that a few days later shouted for him to be crucified.

What is the point of all this? Mark Twain summed up his view of what it means to be human – ‘We are on a plodding sad pilgrimage, this pathetic drift between the eternities.’ Solomon seems to be on the same wavelength. If we find oppression and injustice in the law courts, if we find envy in the workplace, if we find loneliness in our lives, and insecurity even when we reach the highest position – what is the point? Solomon’s point is that ‘under the sun’ (meaning ‘without God’) there is no point. But with God:

1. You can find justice: ‘I urge, then, first of all, that requests, prayers, intercession and thanksgiving be made for everyone – for kings and all those in authority, that we may live peaceful and quiet lives in all godliness and holiness. This is good, and pleases God our Saviour, who wants all men to be saved and to come to a knowledge of the truth. For there is one God and one mediator between God and men, the man Christ Jesus, who gave himself as a ransom for all men – the testimony given in its proper time’ (1 Timothy 2:1-6).

3. You can get out of the rat race, without being lazy and useless: You can get away from ‘envy and selfish ambition’ (James 3:16) and find real peace. Peace does not come from hard work, nor does it come from laziness.

4. You can have the friend who sticks closer than a brother: Perhaps the biggest question here is the question of companionship. Chapter 4 has dealt with the oppressed having no comforter, being without the companionship of family and friends and a lonely king. Christ is the solution to all. Strength is gained from human relationships but the greatest relationship and friendship of all is found in Christ. He is the one who provides meaning. He is our friend – and he is our reason for working. Everything we do we do for the Lord.

The reason I pray for our political leaders to become Christians is not that they will then, Constantine-like, enact legislation that is favourable to Christians. It’s just that I want them to know peace and to find fulfillment in recognising that they are fulfilling their tasks as servants of God.

I suspect that the Queen, with her lifelong service to her country, is far less lonely because of her committed Christian faith than those politicians whose ambitions, like their ‘friends’, are here today and gone tomorrow. The world would be a better place if our political leaders knew, loved, served and obeyed the King of kings. They wouldn’t need to fear their allies, despise their foes or bribe their rivals in order to achieve their ambitions. Nor would they need to purchase people to cure their loneliness and demonstrate their power.

They would be able to keep their eyes on the stars and their feet on the ground.

The Cure for Loneliness – the Cord of Three Strands – (Ecclesiastes 4:7-12)