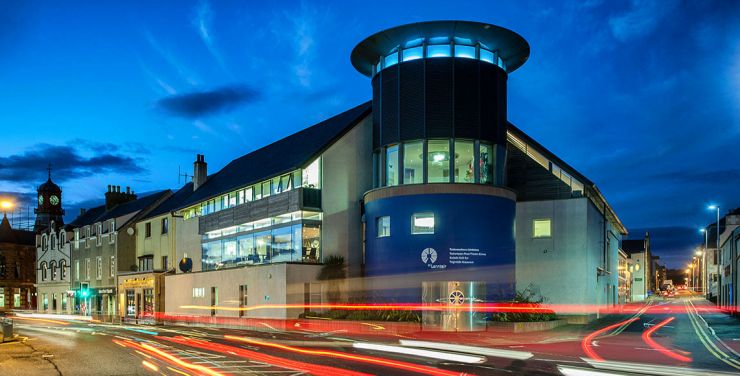 This article was first published on the Affinity website

It used to be said that that only way for the Free Church of Scotland to get its views on any subject heard was to put out a press release stating “Free Church says don’t drop nuclear bomb on a Sunday in Stornoway”.

The view that the Western Isles is filled with stern, joyless Church people, a kind of Tartan Taleban, who enforce a strict and gloomy sabbatarianism, is part of the lazy stereotype so much indulged by journalists, the cultural elites and, sadly, some Christians. So it was with a sense of foreboding that I read the latest headlines mostly portraying the narrative of a Church seeking to impose its beliefs on a freedom-loving people who just want to be able to go to the cinema on a Sunday.

The story is at first glance straightforward: An Lanntair, the arts centre in Stornoway, has decided to have a trial opening on one Sunday a month to show films. The first one, on Sunday the 28 January, being a sell out (the latest Star Wars was always going to do that). The Church is opposed and thus the simplistic narrative is reinforced and repeated. The problem is that the story is not that simple.

An Lanntair have done this without the promised consultation, and appear to have done so not because of populist demand, but because of the prejudices and agenda of a handful of militant secularists. In other words, this is not about helping local people but more about attacking the perceived last bastion of Christianity in Scotland. The National Secular Societyhave been pushing this because they see it as church privilege and low-hanging fruit allowing them to mock and claim victory. One of the differences in today’s society is the way that social media has been used to pressure, abuse and raise the temperature. The Western Isles Secular Society have spread conspiracy theories about the Church being in league with the Masons and the Local Authority, and bullying the poor wee secularists who just want to be able to go to the cinema on Sunday.

James MacIver, minister of Stornoway Free Church, made a strong case for both the arts centre and the Lewis practice of keeping the Lord’s Day: “We want An Lanntair to be the centre of excellence it has the potential to be. That entails reflecting and promoting the local culture, not introducing alien concepts which contradict it under the mantra of trying to establish what the local culture is.”

The secularists response tends to be that it’s just about freedom and that churchgoers don’t have to go to the cinema if they don’t want to. This excessive individualism (I should be allowed to do what I want, when I want) is, of course, not conducive to living in community. One hardly imagines that they would be arguing for cinemas, pubs and shops to be open on their streets at 3.00 in the morning. After all, they don’t have to go to them! Opening the cinema on the Sunday requires people to work in order to provide the service and it does change the whole nature of the community.

The point is that every community has standards. The question is, whose standards should they be? That of the secularists, seeking to knock yet another nail in the perceived coffin of the Church, or that of the local people – including non-churchgoers – who would prefer to have the islands’ traditional Sabbath remain? What is interesting is that local bloggers – including some who have not previously been supportive of the Christian viewpoint regarding the Lord’s Day – have unanimously criticised An Lanntair for their insensitive decision.

Again Rev. James MacIver expressed it well: “It is undeniably the case that the Church, the gospel, and the sanctification of the Lord’s Day have had a long-standing place and respect in that culture. Recent comments show that many who are not members of any church appreciate the legacy of rest laid down by these values. To have these increasingly dismantled and replaced by a ‘freedom’ to be more like communities which were once like our own, would be no less than cultural vandalism. I hope An Lanntair realise that such legacies, once lost, can never be recovered.”

The Stornoway Sabbath saga is not a quaint story of an out-of-touch community coming into the twenty-first century. Rather, it is an example of the kind of intolerance and mocking, smug superiority that our secularist elites seek to impose on the whole country. They talk about diversity, equality and tolerance, but they won’t allow any community to divert from their agenda; they don’t regard Christians as equal and they will only tolerate those who agree with them. Welcome to the Brave New World of Secular Scotland/Britain.