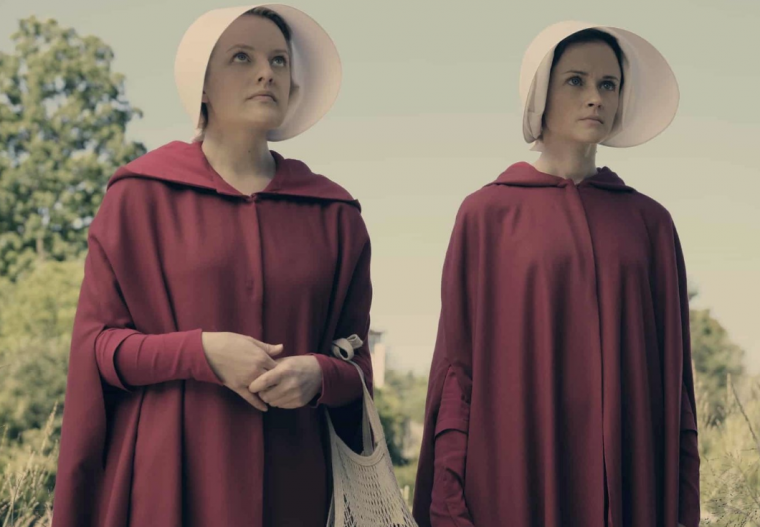 The Handmaid’s Tale is a superbly filmed and acted version of Margaret Attwood’s 1985 novel and has won five Emmys – including Elizabeth Moss in the lead role deservedly winning best actor. The liberal metro-elites love it because it portrays their nightmare – a United States run by religious fundamentalists, in which women are oppressed and treated as a subservient class.

The Handmaid’s Tale portrays an America called Gilead, in which gay men are hanged, abortion is banned and birth control pills are not allowed. Most women have become infertile and so those young women who are fertile are taken as ‘handmaids’ to be impregnated by the ‘commanders’. Although it’s a dystopia, at least the Greens should be happy as the USA finally gets on board and reduces carbon emissions by 70 per cent. And there also appears to be racial equality – at least in the TV series. In the book African Americans are removed to national homelands but in the TV series they have an equal role with the whites – I suspect somewhat cynically that this is because an all-white cast would not have gone down well.

The ‘baddies’ are portrayed in very religious terms. The female leaders who control the handmaids have ‘Irish nun’ accents, solemnly intoning that ‘fertility is a gift from God’ – as the girls are prepared to be raped. The handmaids dress in a nun/puritan style. In one strong scene the handmaids are encouraged to take part in a stoning by the chief ‘nun’ who tells them that ‘God’s love gives us blessings and gives us challenges’ – the challenge in this case being to stone to death one of their sisters. It gives a whole new meaning to the tough love scenario.

The numerous Bible quotes, biblical language and names are set up to portray a scenario where right-wing religious fundamentalists have taken over the USA…watch out, the evangelicals are coming to get you!

The hypocrisy is brilliantly portrayed. The music from Onward Christian Soldiers is played as the master reads from the Bible and then has sex with the ‘handmaid’, while his wife is present observing the grotesquely unerotic scene.

So let’s return to reality. There are countries where religious fundamentalists are stoning people to death. But none of them are ones where Christians have taken control. Of course you could not have a major network portraying a dystopian future where America has become an Islamic republic. That would be Islamophobic! But Christian fundamentalists are fair game – Christophobic isn’t really a term that has caught on yet.

And there are religious cults that do a great deal of harm – including some that profess to be Christian. In an irony that seems to have escaped the maker’s notice, Elizabeth Moss, the star of the show, is a committed member of the Church of Scientology – one of the most cultish and harmful religious groups in the Western world. But again of course, Hollywood would not make a series about the evils of Scientology – there are too many well-known celebrities involved and anyway they would be sued.

Neither is this a film series about Trump’s America, any more than the book was a commentary on Reagan’s America. Ironically, Trump’s misogyny, sexism, bad language, sexual immorality, dodgy business practice and opulent lifestyle has more in common with Harvey Weinstein than it does with Billy Graham. The abuse of women that this fantasy series portrays is seen today as much in the increasing number of Hollywood producers and powerbrokers who, after the Weinstein exposé, have themselves been accused, as it is in the religious authority figures who have been found out. The hypocrisy of conservative fundamentalists preaching religious morality while engaging in sexual immorality is matched only by the hypocrisy of liberal fundamentalists preaching woman’s rights while engaging in sexual abuse.

The Handmaid’s Tale is an ugly series – its sexual explicitness and violence mean that it is out of bounds for anyone with any degree of sensitivity. Unlike The West Wing, which I am now watching for the fourth time, I won’t be going near this one again – not just for the ugliness of its sexual violence but also because of the bigotry and anti-Christian hate speech. It is the kind of programme made about Christians that antisemites would make about Jews. It demonises ‘the other’. Despite the constant citation of Scripture, the portrayal of Christianity in the drama is the antithesis of what real Christianity is. Real Christianity is not religious hypocrites enforcing their perverted teachings through the barrel of a gun.

Some people say, ‘It’s only a drama – who cares?’ I care. There are those who know nothing about Christianity who when they see this programme will think that this is what it is about. The producers even managed to have a comment at the end: ‘If you have been affected by the issues in this programme, call…’ as though being part of a religious country run by Christian fundamentalists is a common or likely occurrence.

The Handmaid’s Tale is part of a general cultural shift in which Bible-believing Christians are the bogeymen of contemporary society. While in the West we are nowhere near the level of persecution that Christians in many countries face, I’m still not a big fan of encouraging people to hate us on the basis of a distorted and perverse view of the Christian faith.

The way for us to challenge and handle this kind of post-truth alternative-fact fantasy is not to complain, whine and curl up in our Christian snowflake ball. Let’s get out there in the real world and be its salt and light – sharing the truth, beauty, love and freedom of Christ. This Christmas it’s not the fear-mongering of The Handmaid’s Tale that our world needs, but the Good News of the Christ.