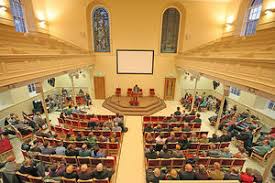 Last Sunday was our 25th anniversary in St Peters – I took the opportunity in the evening to reflect on where we have been and where we are going – as we looked at Psalm 79 in our communion service.  It has a lessons for the wider church as well…

These are the notes from the sermon:

The Psalmist is an eyewitness who has seen many things. The irony of Psalm 79 coming after Ps 78. In Psalm 78 David’s kingdom has been established his role as shepherd king seems to go on forever. 400 years later…Davidic monarchy has come to an end…the holy temple has been defiled and is in ruins. What had been according to Ps 78 established forever now seems to have gone.

He laments the devastation of Jerusalem in 587 BC. Note that he expresses his feelings…why do so if God already knows? There is a lot to lament in the wider society but lets lament for the church. The decline in the Church overall. The Church of Scotland has lost a third of its members in 12 years. The Free Church in the 1990’s was a disaster and then a change in the 2010’s….had to change administration , college, finance and how we do mission. The Evangelical Church…confusion…Steve Chalke, Brian McClaren….wet and weak. Charismatic confusion.

St Peters….are there things to lament here? Yes – backslidings – people turning away – deaths – There are many many struggles.

He notes that it has gone on for some time. The key thing here though is the harm done to the glory of God. It is his temple that has been defiled. There was no one left to perform the service of the temple or even to bury the dead! God’s people are kept in contempt – they are mocked. It is a dreadful thing to fall into the hands of the living God

What about the jealousy of God?   Exodus 34 .14 Do not worship any other god,for the LORD, whose name is Jealous, is a jealous God This is part of the divine nature.

What dreadful thing have they done to deserve such judgement? It was just sin. The non-acknowledgement of God. It’s not just their sins. But our sins. Sins here are shortcomings. We admit our own shortcomings…we are objects of reproach. Its our fathers and our sins. Its why we have our confession of sin.

But we do not just lament the sins we call for the overthrow of those who would oppress and do evil. Part of the positive side of leaving vengeance to the Lord is the prayer that seeks the overthrow of every power that continues to mistreat the Lord’s people. Do not hold against us the sins of past generations.

Jeremiah 31: 34 No longer will they teach their neighbour, or say to one another, ‘Know the LORD,’ because they will all know me, from the least of them to the greatest,” declares the LORD.For I will forgive their wickedness and will remember their sins no more.”

Luke 11:47 “Woe to you, because you build tombs for the prophets, and it was your ancestors who killed them. 48 So you testify that you approve of what your ancestors did; they killed the prophets, and you build their tombs. 49 Because of this, God in his wisdom said, ‘I will send them prophets and apostles, some of whom they will kill and others they will persecute.’ 50 Therefore this generation will be held responsible for the blood of all the prophets that has been shed since the beginning of the world, 51 from the blood of Abel to the blood of Zechariah, who was killed between the altar and the sanctuary. Yes, I tell you, this generation will be held responsible for it all

This verse cannot be appealed to as an excuse. The generation inheriting guilt is not thereby less guilty but more guilty. What do I lament just now? Our sins…..country…church….Free Church….

St Peters – Complacency, triviality and opportunities not being taken.

There is an appeal to the compassion of God. The passionate emotional love of God. Help us for the glory of your name. Come to meet us… Like in the parable of the prodigal son.

Note that the appeal is to the divine nature of God and not primarily to our needs. It is for the sake of the glory of God. Forgiveness can only be sought on the grounds of who God is. Forgive our sins. The Hebrew word used is kephar. -which means atonement.

There is real confusion..v.9.. God is a God of faithfulness and injustice but there are so many things that are faithless and unjust. The question here is one of timing….That is so key…look forward to Christ. We are those who are imprisoned. We are those who are condemned to die. We are those who are mocked. The hope in verse 13 rests on two foundations. The Lord will always stand by his own reputation verse 10 and 12 and secondly he will always stand by his threatened people verse 10 to 11. Because even when labouring under the infliction of his wrath we are still your people the sheep of your pasture

What I love about this is that we can plead our miseries before God – he was a man of sorrows and acquainted with grief. He has moved to pity and action by our groaning. And I love the promise….of what we will do…praise…think about St Peters – how are you going to glorify God and enjoy him now! In Christ everything is Yes.