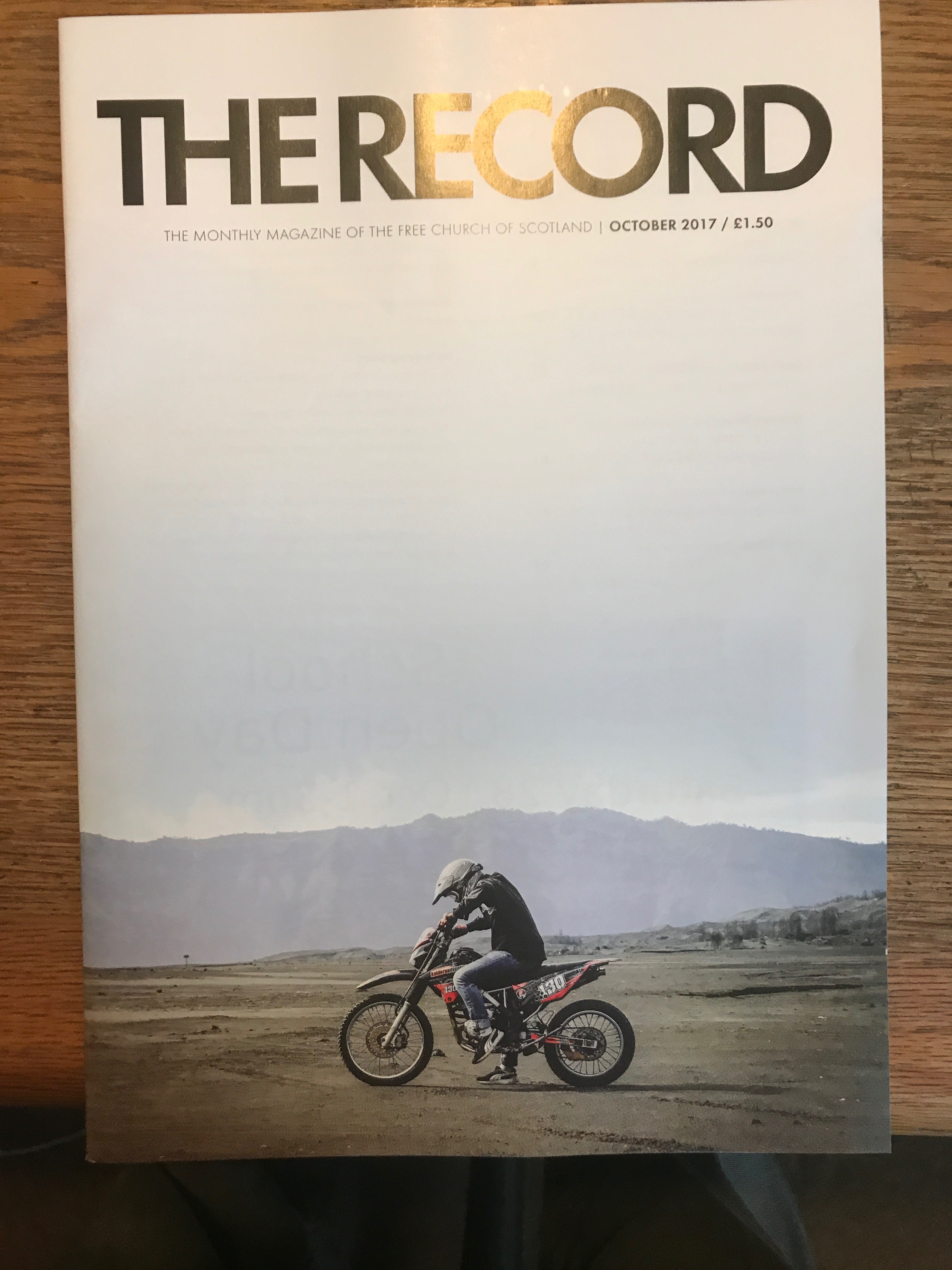 This is the lead article in the October Record….

This month is the 500th anniversary of the event that is assumed to have been the beginning of the Protestant Reformation – Luther’s nailing of his 95 theses to the doors of the cathedral in Wittenberg. There will be a variety of reactions to this anniversary, from studied indifference from the many to joyous enthusiasm from the few. Should we bother?

There are good reasons not to celebrate the Reformation.

After all it was a split in the Church and resulted in strife and even wars, including the brutal 30 years war. How can we celebrate that? Surely the Protestant Reformation is something to be regretted and the church of Jesus Christ would be far better today if there had not been this split? Certainly the mainstream Protestant churches seem to be largely following this line.

Then there is the fact that most people in Scotland and the UK today are ignorant of the Reformation.

They have no idea what it means for Scotland to be a ‘Reformed’ country or that the United Kingdom was formed as a union of kingdoms based on Protestantism. In fact most people have no idea what Protestantism is – unless it is a vague notion of it being associated with bowler hatted men marching on Orange parades, Rangers fans and something called ‘sectarianism’. What’s the point of celebrating something that most people are ignorant of? You are more likely to get an American tourist in St Andrews being able to tell you about George Wishart’s or Patrick Hamilton’s martyrdom in the town, than a local!

Finally celebrating the Reformation might be considered not just as contradictory, and pointless, but also divisive.

Given that there is still in some areas of Scotland a problem with sectarianism, given that the church of Jesus Christ is faced with militant secularists, other religions and overwhelming apathy and ignorance, surely celebrating a 500 year old split in that church would be counterproductive?

It can be argued that the Reformation, along with the Enlightenment are the two key cornerstones of modern Western democracy

These are valid objections but yet the Reformation is something that we should commemorate, learn from and yes, celebrate. Why? It can be argued that the Reformation, along with the Enlightenment are the two key cornerstones of modern Western democracy. Freedom of speech, freedom of religion and political freedom are all direct fruits of the Reformation of the church. The Roman church had become corrupt, totalitarian and an abuser of freedom. The Protestant churches, although not themselves without fault, opened the doors to these freedoms that we now take for granted. It is important that we remember our roots. If we don’t we will lose the fruits. We are in grave danger of losing the freedoms that came alone with the Protestant Reformation. Lets remember the past so that we don’t lose the future.

The Heart of the Matter

There is one area which is particularly important and which speaks the same to us today. Whilst the fruits of the Reformation were political, social, and spiritual freedom – they were the fruits not the heart of the matter. The heart of the matter was that the Reformation was simply a recovery of the Gospel. It is not that the Roman Catholic Church did not have the gospel – it was more that it had become confused with many other issues – and instead of being the pillar and foundation of the truth – the Church had become a corrupter of the truth. Today in the church in the West we face the same issue. What is the Gospel? What is the Good News?

Everyone in every church likes to claim they have the gospel…well almost everyone. I once knocked at a door in Dumfries and in conversation with the woman who answered asked her if her minister preached the Gospel “Oh, no,” she replied, in a horrified tone. “We’re a normal Church of Scotland!”. That was almost as bad as the man who responded to the same question in the same manner; “Oh, no – we’re Church of England”!

Are you a Gospel Church?

But nowadays every liberal, broad evangelical, Catholic, Reformed want to lay claim to the title of Gospel proclaimers. I was once asked to take part in a joint mission in a Scottish town that included one of the local Church of Scotland’s. I did not see that as a problem because there were (and still are) a good number of C of S congregations and ministers that remained faithful to the Gospel and whom we could work with. During a preliminary meeting I began to be concerned about the basis on which we were going to do this mission. “Are you a Gospel Church?” was the subtle question. “Oh, yes” came the certain reply. ‘What do you mean by the Gospel?’ “Telling people that they are saved!”. That was the end of the mission. These were two different gospels – telling people that they are saved is vastly different from telling people they are lost but they can be saved!

More recently I have come across this strange phenomena. Mainstream churches that use all the Gospel language but mean something very different. They would deny the atonement, the virgin birth, heaven and hell, and the necessity of the New Birth, but they still get mortally offended and ‘hurt’; if you dare to say they are not a Gospel church. “Of course we are a Gospel church – look at all the work we do. We are faithful people seeking to bring the Good news of Jesus into our communities”. The combination of the hurt card and nice sounding language often means that those who are genuine evangelicals back off and buy into what is in fact nonsense – indeed, worse than that. It is poison.

Those who are genuine bible believing Christians need to stand together, even if they differ on secondary issues, for the basic and most fundamental truths of the Gospel.

We need a Reformation in Scotland today. A Reformation of the church. Those who are genuine bible believing Christians need to stand together, even if they differ on secondary issues, for the basic and most fundamental truths of the Gospel. We need to expose those who use the language of Zion, but reverse it’s meaning and confuse the people. This is not a new problem. Robert Murray McCheyne lamented in the mid 19th Century – . “It is confessed that many of our ministers to not preach the gospel – alas! Because they know it not. Yet they have complete control over their pulpits, and may never suffer the truth to be heard there during their whole incumbency. And yet our church consigns these parishes to their tender mercies for perhaps fifty years, without a sigh! Should not certain men be ordained as evangelists, with full power to preach in every pulpit of their district – faithful, judicious, lively preachers, who may go from parish to parish, and thus carry life into many a dead corner?”

Instead of showing denominational loyalty to dead churches and false, lazy or ignorant shepherds (the real wolves in sheeps clothing), we need to get back to the basics of the Reformation and make sure these glorious truths are heralded clearly throughout our land.

Sola Scriptura – The Bible alone is our highest and ultimate authority. Not the General Assembly, or Popes, Priests and Ministers, nor the latest version of charismatic prophecy. As the Church in Scotland has exchanged the glories of God-given Scripture, for human fashion, we have been incredibly weakened.

Sola Fide – We are not saved or justified through our many good works. It is only faith in Christ that saves us.

Sola Gratia – None of us deserves salvation. None of us can earn it. It is both the most humbling and liberating truth that we are saved by grace alone.

Solu Christus – In Christ alone our hope is found. We can too easily become religious moralists, liturgists, traditionalists or social justice warriors – thinking that this is what saves us. We are saved by Christ. Alone. That is why we proclaim Jesus – and him crucified. This is the power of the Gospel.

Soli Deo Gloria – To God’s glory alone. After finishing every piece of his glorious music, Bach would sign it SDG. To the glory of God alone. If we recovered more of that zeal, humility and love – what a transformation would be seen in our self-obsessed, faction ridden, hypocritical churches.

Should we remember the Reformation? Of course. But not to ‘glorify the past while the future dries up’. We should remember it because at its heart were the glorious truths that we all need if we are to have new hearts and reformed lives. SDG.

You may also enjoy this discussion with Keller, Piper and Carson on the same question…