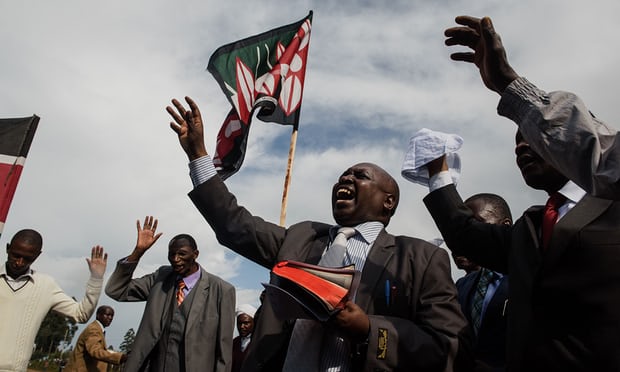 Thanks for all the feedback for LED 2 – 50 Years Homosexual Celebration- Transgender Madness – Liu Xiaobo – The Guardian and the C of E – The Cult of Trudeau – Alice Cooper – The End of the Car? – Steve Chalke’s Sin.  and LED 1 – Boots and Contraception; Champagne Socialism; Gay Blood; The Gender Agenda; The Extremism Trojan Horse and more…  Its good to know that some people appreciate these musings.

This week has been a fascinating week – with the trends noticed in the previous LEDs continuing.   The madness in our society continues – although there are occasional shafts of light.

An Important Election in Africa

We perhaps don’t pay as much attention to Africa as we should. This week there is an important election in one of that continent’s most important countries – Kenya. 10 years ago over 1200 people were killed in post-election violence, and tensions are running high again. The Kenyan official in charge of the country’s new computerised voting system – which is supposed to deliver a fair and credible result in the election – has been abducted, tortured and murdered.  Kenya’s problems reflect that of many countries in Africa – ethnic divisions and political corruption. Kenya’s MPs are amongst the highest paid in the world and this has resulted in a great deal being at stake for individuals and their families.  Kenya Braced for Violence – the Guardian

In 1999 Kosovo gained independence from Yugoslavia – with the aid of a NATO bombing campaign. And yet now many Kosovors have become militant Islamists.  Why?  Die Welt reported  that the main reason is because of Saudi Arabia. It has poured money into Kosovo, spreading its radical version of Islam by building schools and mosques and importing Salafist clerics.  A largely secular form of Islam has been turned into a highly radicalised one – thanks to the Saudis.

Is Neymar the Most Valuable Christian in the World?

Neymar has just been transferred from Barcelona to Paris St Germain for the astonishing sum of £198 million. He will be paid a salary of over half £1 million per week. It is ironic that if a Christian pastor or tele-evangelist was to be paid even 1/10 of that sum they would be  outrage in the secular press,  but when a footballer is sold for that amount, hardly an eyebrow was raised.    I find it depressing that when people are campaigning about austerity we managed to pay our sporting entertainers such ludicrous salaries although this article in Premier has an interesting take on Neymar’s Christianity.

Man Charged for Having Sex with Child Doll

In the first case of its kind a man has been found guilty of importing a child doll in order to have sex with it –  Child Sex Doll an Obscene Item    this is a grotesque case – what is even more disturbing are the number of  “experts” who think that such dolls should be used, as they may provide an outlet for those whose sexuality is pedophilia.

As we pointed out last week our civic organisations and institutions are falling over themselves to try to prove how Stonewall/gay friendly they are.   This week we had the extraordinary story of the National trust trying to compel staff to wear and LGBT badge with those who refuse to do so being threatened with being removed. After a mass revolt they were forced to back down. National Trust Forced to Back Down

But don’t worry – if you lose your job at the National Trust you could always get a new one in the cash strapped NHS – Note this is only the Assistant…(apparently one of four) – there is also a Director.  Who needs doctors or nurses when we can have directors of equality and diversity?!

Breastfeeding Not Permitted – Its ChestFeeding!

Last week I was invited by BBC radio Scotland to appear on the Call Kaye phone in programme to discuss the question of teaching breastfeeding to all children in schools.  You can hear the programme Here   My part was at the 45 minute mark.

When someone critiqued me for speaking about this just because I am not a woman (such sexism!),  I somewhat jokingly remarked that it was okay I could just redefine myself as a woman – at least according to the government!   In response to this I received the following information from a doctor – who understandably in the increasingly fascistic state in which we live – has to remain anonymous.

“David, I hope you are aware that the favoured term is chest feeding. This is to avoid discrimination/hurt feelings against transgender women using artificial breast packs to nurture their babies grown in surrogate wombs…… But now the transgender issue had been creeping through since 2015, the whole situation is getting ludicrous. NHS management have all been inducted through the modern freemasonry of ‘common purpose’ management training (programming). So they are all in a huge twist to accommodate the impossible. It’s awful. And I can’t even ‘like’ some of your posts because all of FB knows and it’s seen as ‘hate’….. I now rarely like or comment on anything because I enjoy being a doctor and the authoritarian control the GMC has taken over the last few years is alarming, if you don’t sing from their hymn sheet. Almost everything you write in your posts resonates powerfully with what is happening everywhere, the insidious checkmate of the new religion”

I also received information about the guidelines from the General Medical Council –  which discourages the use of the term breastfeeding!   Even more alarming was the information I received from one consultant who was told by his boss,  that they were very concerned about consultants and  doctors who did not have Facebook pages, because this could indicate that they had something to hide. The policing of our thoughts is well and truly underway!

1 June – Canadian bill Supporting Children, Youth and Families Act 2017, allows the State to remove children from parents who don’t agree with the LGBTQI agenda “I would consider it a form of abuse, when a child identifies one way and a caregiver is saying no, you need to do this differently, said Michael Coteau, Minister of Child and Family Services. If its abuse and it’s within the definition, a child can be removed from that environment and placed into protection where the abuse stops.”

The transgender madness continues. The BBC being the prime propaganda outlet – they are now even proposing to have a reality TV show where a school tries to have gender neutral children! It is little wonder that they have been criticised for manipulating and abusing children in this way.  BBC Criticised for Social Manipulation of Children

But the beast eats itself – this is the most amusing tweet of the week…Brothers and Sisters can no longer be used….

An Obituary to be Remembered

“Drugs were a major love in her life as June had no hobbies, made no contribution to society, and rarely shared a kind word or deed in her life. Please let June Miller’s life be a cautionary tale that addiction and hatred are no es bueno for the living. We speak for the majority of the family when we say her presence will not be missed by many, very few tears will be shed, and there will be no lamenting over her passing. We truly believe, at the end of the day, all of us were really only miss what we never had – a mother, grandmother, and great-grandmother.”

Obituary for 82-year-old Cornelia June Rogers in the Cherokee Scout newspaper.    It may be unusual to have the truth told at a funeral – at least the whole truth – but it should be a solemn reminder to us that on the day of judgement, nothing will be hidden.

And to finish with – a couple of good news Bible stories.

And then this wonderful news that you may have missed –

The oldest part of the Bible ever discovered has been read and they have found that in 2,000 years the text of Leviticus has not changed one iota – the preservation of the Biblical manuscripts is an astonishing story – and this is just a further proof of that. The Oldest Bible Text ever found

“There are, needless to say, lots of other practical reasons why allowing people legally to decide their own gender is a terrible idea: the destructive effect on women’s sport; the constraints it will inevitably place on the freedom of speech of the many others who, quite rightly, think this is an S JW bridge too far; the mind warping effects it is going to have on the impressionable children who no doubt are going to be exposed to this post-modern guff as part of their ‘education’. But the worst thing of all, as far as I can see, is that it capriciously, irresponsibly and unnecessarily rejects one of the most basic truths of nature: that there are men and there are women; that we are identifiably different. For me this is one of those pivotal moments in the decline of Western civilisation. The barbarians are at the gate and here’s Justin Greening pushing the doors open wide: “C’mon in guys, gals – or however you want to define yourselves! The city is all yours. Or is that zirs?” James Delingpole – the Spectator

‘Last year, a website called Pornhub had 23 billion visits. Some of the popular search terms were ‘crying in pain’, ‘sleep assault’ and ‘teen’. It’s possible that people watch this stuff online and remain loving partners and pillars of society, it’s more likely that they don’t. The Internet has changed so much of our culture. We rage. We shriek. We hate. We do this in the name of free speech. We buy things with a click. We swipe for sex. We want instant everything, all the time. When Tim Berners-Lee imagined ‘an open platform that would allow everyone everywhere to share information’, he probably didn’t dream of a Wild West that would do us so much harm” Christina Patterson in the Guardian

“Free love – in my experience the most expensive kind of love there is”. Policeman in Endeavour –  The absolutely superb spin-off series from Morse.