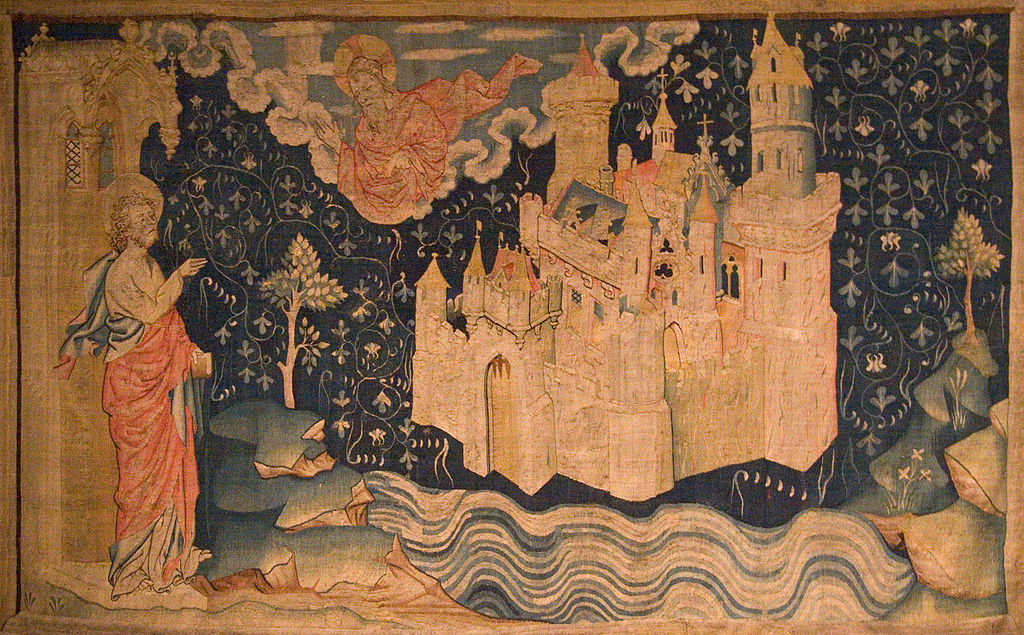 The scene will be familiar to many. You are at a Christian ‘rally’ and the singer/songwriter stands up and tells you about a new song ‘the Lord has given me’. You wait with baited breath and the song is as banal and predictable as you feared. I recall one such memorable occasion where the perfect riposte was delivered. We watched in wonder as the leader walked over to the singer, removed the music from his music stand, scrunched it up and threw it in the bin before declaring: ‘The Lord has given, the Lord has taken away, blessed be the name of the Lord!’

Singing and music are not peripheral parts of Christianity. They are central. This weeks Revelation passage (ch.14) again reminds us that heaven is a place of song. The Lamb is standing on Mount Zion, with the 144,000 (see Revelation 7) – those who have the Fathers name written on their foreheads, rather than the number of the beast. And there is a great noise – like the roar of rushing waters and a loud peal of thunder. There is a sound like harpists playing their harps and the new song is sung. Except it’s not an easy song to sing! No one could learn it save those who had been redeemed from the earth.

And then comes this extraordinary description of these ‘redeemed’ – ‘They are those who did not defile themselves with women.’ What is this? It reads like some kind of extremist Christian version of ISIS? How misogynistic is that? Well, hang on a minute. Remember what was said about having to read Revelation in the context of the culture and the context of the Old Testament? In the OT there were rules for soldiers about to go to war (Deuteronomy 20:1-9) that included abstaining from sexual relations before heading to battle. This is what is being referred to here- as well as the imagery of not committing spiritual adultery with Babylon. The New Testament does not regard sex between male and female as defilement. But John is using imagery here in the same way as he uses the imagery of the 144,000 (you are going to have a lot of difficulty if you interpret this literally!) – the bride of Christ must keep herself pure for Christ and must not run off after others Lords and gods. Its also interesting that John uses a term for virgins that is usually used for women – in effect he is using both male and female terms to refer to all the redeemed of Gods people.

Again the point is straightforward – anyone can sing the song of the Redeemed, if they are redeemed. It is impossible to learn and sing without that experience. That’s why real Gospel music is real soul music. It can only be sung in a meaningful sense by those who have experienced the good news. And they sing as they follow the Lamb. They go wherever he goes. In the trite words of the old couplet, ‘Where he leads me I will follow, what he feeds me I will swallow.’

Like the waves of the sea….’heavenly singing from Lewis!
So we have the songs – now we have the angels. In the popular imagination angels are like bunnies, dolphins and little children – cute and cuddly. ‘She’s a wee angel’. But not these ones. They come with a great and a terrible message – all six of them. Its about the cup of wrath for those who worship the beast, the Son of Man harvesting the earth at the end of time and the bloody mess of the great winepress of God’s wrath. This is theology 18 plus certification style.

There are some real encouragements and challenges that we might miss in the midst of this very vivid and awesome imagery.

First of all note that the 144,000 of Revelation 7 are now all signed and sealed in heaven. Not one of them has been lost.

Secondly note that the Lord’s people are people of truth. No lie was found in their mouths; they are blameless. I sometimes think that in this post-truth society we are far too prone to excuse lying on the basis that ‘everyone does it’. That is not to be the Christian’s position. There is someone who fact checks far better than any media outlet – and it is him we serve. The Lord’s people should be known for their honesty.

Thirdly note that the third angel has the job of proclaiming the eternal Gospel to every nation, language, people and tribe. This is the mandate that was given to the church (Matthew 28) and will continue until the end of time. And yet it’s a ‘good news’ message that many of us would struggle to see as good news: ‘Fear God and give him glory, because the hour of his judgement has come. Worship him who made the heavens, the earth, the sea and the springs of water.’

The question arises how does judgement mix with the good news? It always does. Look for example at how Paul describes it in Romans 2:16 – This will take place on the day when God judges people’s secrets through Jesus Christ, as my gospel declares. So how is this good news? Is it an attempt to scare people into the kingdom of God? Is this is what we should be doing today? Standing at street corners, yelling at passers by with barely unconcealed glee, that they are all doomed? No. God forbid that we should so crassly twist scripture in that way. This is a genuine call for repentance. It is letting people know that there is still time. That’s good news. Its also letting them know that God will overthrow evil. That’s good news. And it is a message to the Church that the Lord sees and loves us in our persecution. That’s good news.

We continue to proclaim the good news to all – snatching the brands from the burning. This is the eternal gospel. Always valid. Always relevant. Always suitable for every human being and every culture.

Fourthly a clear part of the Gospel message is that there is a day of judgement coming when the full strength of Gods wrath is poured out. We live in a culture and time when many evangelical Christians struggle with that idea – as perhaps we should. But we must not reject it – or in saying we are following Christ, we are rejecting what he himself taught. There is no rest; there is no peace, for the wicked. But there is for the Lord’s people. And the door is open for all.

Finally look at the comfort for the Lord’s people in death. Those who die in the Lord are blessed. We associate blessedness with life – as we should. But John sees a great blessedness in death – at least for those who die in the Lord. That blessedness is described in two ways – firstly they are really at rest. Its not that there is no work in heaven…its rather that there is no pain and therefore there is no fruitless, frustrating and unenjoyable work. But there is also the great comfort that our deeds on this earth are not worthless – just to be burned up and forgotten. They follow after us. Is that not an incredible thought? That what we do on earth for Christ, will follow us to heaven and be part of his eternal worship? People say nothing we do lives on forever. In a humanistic atheistic worldview, that’s true. It’s all going to be destroyed. But for the Christian, the dross will be burned, but the beautiful service that we offer to Christ, WILL last forever. What a dignity that should bestow on all the work that we do for him. Nothing wasted. Nothing lost. Nothing pointless. Even the songs we sing will be forever.

An old Presbyterian minister friend was attending a charismatic service. As the umpteenth repletion of ‘I will sing of your love forever’ continued, he turned to his wife and in a too loud stage whisper pronounced, ‘I didn’t think we were going to take this literally!’ Singing of Gods love forever does not mean endless repetition. What it does mean is endless renewal, endless creativity and endless joy. Lets remain faithful to Jesus whatever happens. No eye has seen, no ear has heard, no mind has conceived, what God has in store for those who do.

The Number of the Beast – Revelation 13