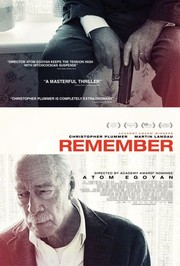 My film reviews are like bus’s – you wait ages for one, and then two come along at once.  But I could not wait to write this one.  We went to see ‘Remember’ last night at our usual venue, Dundee Contemporary Arts…the small cinema two was virtually empty..but the handful of us who saw this remarkable film were stunned.  It has possibly the most stunning and surprizing ending I have ever seen in a film…so I won’t spoil things for you with a spoiler.

Remember is the story of Zev (Christopher Plummer)  a 90-year-old survivor of Auschwitz, who struggles with dementia and is living a quiet retirement home.  After his wife dies he gets a package from his friend (Max – played by Martin Landau)  which gives him step by step instructions how to trace and kill the cruel guard, who is now living in the US.  The rest of the film follows this journey….it is tense, dramatic and beautifully filmed.  Christopher Plummer as an 80+ actor is incredible.   And as indicated the ending will have you on the edge of your seat!   The director is Atom Egoyan

The film itself raises a number of significant issues – the question of dementia, the banality of evil and the requirements of justice.   If you were an Auschwitz guard who has killed many people, and then 70 years later are a doting grandad living a peaceful life with a large extended family, is it right that someone should try to kill you and thus upset so many others?   And then of course there is the key question of revenge.   I think there is a real problem for the unbeliever here.  If this life is all there is, then it is only in this life that we can be judged and pay for our crimes.  But that means an endless of revenge, and of course the great possibility of injustice because of fallible human judges.   But if you believe that justice (and revenge) belongs to God, that there is a day of Judgement where every careless word and every evil act will be judged, that changes the whole perspective.

For the Christian we know that God does ‘remember’ and that his memory is never flawed.  An all knowing all just God is essential to true justice.  Without it we have only the justice of the arbitrary and of the sinful rich and powerful.   The Supreme Court of God is the guarantor of human freedom, peace and forgiveness.    There is of course one thing that God ‘forgets’ for those who are in Christ – our sins.   The Lord remembers his people and ‘forgets’ their sins – because those sins have been redeemed and atoned for. (Psalm 103).

A stunning film….if you get a chance go and see it.  You will not be disappointed. 9/10