I have a confession to make.  I love America.   Yes there are many aspects that are disturbing and things that grate to a European, but I do love America.   Having returned from a really eventful trip to the US I thought I would write down some reflections before the jetlag wears off.  I had intended to write an update every day but that was a bit optimistic – I was kept really busy and just did not have the time

However I thought I would summarise everything in the following way.

1) God has Blessed America –  America is a blessed nation. Visiting New York and seeing Ellis Island and the Statue of Liberty is a great reminder of how much blessing has been brought to and through America.  For many decades, with all its faults, the USA has been a bastion of liberty and freedom.   Its hard not to love America.

2) God Continues to Bless America – We saw this at Parkside.  To preach in a church where there is sound biblical teaching and a real and deep love for Jesus and where God continues to bless was fantastic.  I preached to around 3500 on Sunday.  But it was not the numbers, nor the massive building that really struck me.  What really impressed was the leadership team and the workers in the congregation.  I am sure (because they are human) that Parkside is a church shot through with problems, but that is why the Lord has blessed them with a collective leadership which certainly seems to work together well.   Another note is that we are often quick to criticise praise bands and the excesses that sometimes happen, but too slow to offer praise when they get it right.  Alistair Begg clearly regards the praise as vital and that was shown in the Parkside praise band who I thought were balanced, biblical and stimulating.  We made some new friends and I have to say that both Annabel and I were really impressed with Jeff and Terry who were a bundle of energetic joy, compassion and wisdom, and our ‘minder’ Jonathan, who looked after us and did so with a graciousness and humility which glorified Christ.  America is blessed when she is served by many such ordinary extraordinary Christians.   The generosity of the Lord’s people was overwhelming and humbling.

The Pastors conference was a sell out – with 1267 church leaders attending.   It was a joy to preach and share with them.  And it was an incredible experience to share with Tim Keller and Alistair Begg.  God continues to bless the US with such pastors. Alistair is a gift of God, (from Scotland!) whose local church and wider ministry is a significant factor in the US Church. He has a wonderful ability to explain and proclaim the Word of God clearly.  Tim is just the sharpest exegete of culture I know – the fact that he is also a superb exegete of the Bible and brings the two together is what makes his ministry so helpful to many of us beyond his own congregation.   But it was not just the well known pastors. One of the things I loved about the conference was the fact that so many ‘blue collar’ pastors were there, battered and bruised, and hungry for the Word of God.  I felt at home with them!   I love Tim Keller and Alistair Begg, both of whom are great gifts to the Church and for me personally a great help to my ministry, but the Basics conference was not about them.  It was about the 1267 men who are going to go back to their (mostly) small congregations and preach the Word of God – which cannot and will not return empty.  It was an honour to be with them. 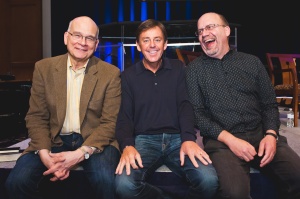 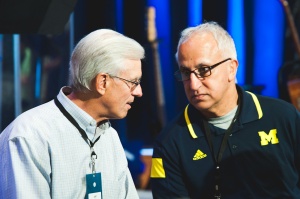 I should add as a kind of footnote here that I was richly blessed here (as was Annabel).  I was not really looking forward to this conference.  I feel out of place in most settings and certainly a big US conference with great speakers was not my native environment!   I know that it is the Word of God whoever brings it (and that is my comfort) but surely you can understand how out of place I felt.  And yet God blessed me greatly.  Tim and Alistair did not behave like ‘celebrities’ and I loved working with them.  In fact I thought that the balance between the three of us seemed to work well – even on the panel where half way through I got a massive migraine and thought I was going to throw up!  (I thought at the time – do I walk off or stay and be sick in front of everyone? As I did not want to become a YouTube hit, throwing up over Tim Keller and Alistair Begg,  I just prayed that the Lord would take me through the last 30 minutes! Thankfully he did). Most of all I felt at home amongst the ‘blue collar’ pastors.  I wondered if my Scottishness, directness, weird sense of humour and passion would translate.  All I could ask for was that some would be helped and encouraged, and that appears to have been the case. What was especially encouraging was the number of those who told me that they were greatfull for Magnificent Obsession, The Dawkins Letters, Awakening, and Engaging with Atheists. It is humbling to know that something you have written in Scotland is being used in the US and elsewhere.

You can get the sessions, photos etc and reports here –

3) God Bless America – We need to pray for this because all is not well in the US.  Its political system is in trouble – prone to corruption, dumbing down and short termism. It is terrifying that someone with the reputation and inabilities of Hilary Clinton could actually become the most powerful person in the world – primarily because she has the backing of the corporate world which will grant her $2 billion of a war chest.  Some of the alternatives ain’t all that great either!  There are many other problems in the US (materialism, racism, sexual confusion, economic injustice,  crime etc) but I think I would sum it up this way.  With Christianity the US is a great country – without it I suspect it will become a hell on earth. Freedom without Christ will lead to destruction of all that is good in the US, and of course the destruction of freedom itself.  Which is why we need to pray that God would bless America.   Perhaps the greatest symbol of the US is the Statue of Liberty…that is what we should pray for…that the US would continue to be a free country ‘under God’ which honours God and his word, and says

‘Give me your tired, your poor,
Your huddled masses yearning to breathe free,
The wretched refuse of your teeming shore.
Send these, the homeless, tempest-tossed, to me: 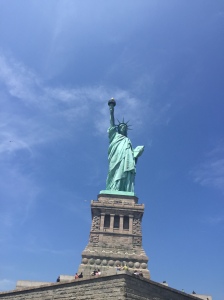 I lift my lamp beside the golden door.” 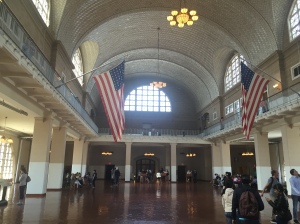 All is not well in the church either.  I don’t like the celebrity culture, the emphasis on money, the corporate business mentality or the view that America = Christianity.  Yes much has been given to the Church in the US, but to whom much has been given, much is required.   I think that a great deal of the Church in the US is self-obsessed, consumerist, dumbed down and shallow.    How else can you explain a Church where Joel Osteen, Joyce Meyer and Rob Bell are significant figures?  But its not just the obvious false teachers.  My fear is that the Church is being invaded by the culture, rather than the other way round.   If the Church in the US does not waken up, then I suspect its decline will be even quicker than in Europe.  Once ordinary Americans work out that they can be rich, ‘happy’ Americans without God, then they will dispense with the Church, whilst continuing to pay lip service to ‘faith’ in God.   If all that the Church offers them is a ‘spiritualised’ version of the pre-dominant culture, then the collapse is certain.    My view is that the Church in the US is in deep trouble, and that therefore the US is in trouble.

Which is why I leave the US, thankful for the country and its history, thankful for what God continues to do in and through the Church, and yet with a heavy heart.  The storm is coming and I don’t know if the Church is ready.  The Church really does need to return to ‘Basics’.   The words of Robert Zimmerman are apposite (the whole song is – but I just give you the first verse).

Come gather ’round people
Wherever you roam
And admit that the waters
Around you have grown
And accept it that soon
You’ll be drenched to the bone
If your time to you
Is worth savin’
Then you better start swimmin’
Or you’ll sink like a stone
For the times they are a-changin’.

The words of Jesus offer hope –  if the American church wakes up then maybe, just maybe, the candlestick won’t be removed…

3 “To the angel of the church in Sardis write:

These are the words of him who holds the seven spirits of God and the seven stars. I know your deeds; you have a reputation of being alive, but you are dead. 2 Wake up! Strengthen what remains and is about to die, for I have not found your deeds complete in the sight of my God. 3 Remember, therefore, what you have received and heard; obey it, and repent. But if you do not wake up, I will come like a thief, and you will not know at what time I will come to you.
4 Yet you have a few people in Sardis who have not soiled their clothes. They will walk with me, dressed in white, for they are worthy. 5 He who overcomes will, like them, be dressed in white. I will never blot out his name from the book of life, but will acknowledge his name before my Father and his angels. 6 He who has an ear, let him hear what the Spirit says to the churches.